Back in the ’70s, producers like Roger Corman would turn out a movie like any in the “The Fast & the Furious” franchise within a week. These action movies were built on thin, unbelievable plot lines and situations and over-the-top explosions and set pieces. A part of me is happy that films like this – action-driven stories that celebrate pyrotechnic effects – still exist, the other part of me is unhappy that these movies now cost so much to make. But, as the box office proves time and time again, they make their money back and then some.

The film that launched the “Fast & Furious” franchise was a 30 million dollar action movie featuring fast cars, attractive women, great stunts, and a plot essentially adaptated frmom “Point Break.” The films have since sent the characters off on a series of related adventures that are less focused on racing and typically revolve around a heist. The main characters are “good” criminals, doing the right thing from the wrong side of the law. 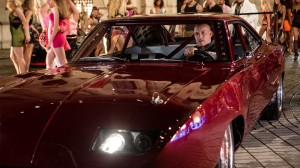 “Fast Five,” the strongest in the franchise, introduced federal agent Luke Hobbs (Dwayne Johnson), and he returns in “Fast & Furious 6” looking for help from the Fast team led by Dominic Toretto (Vin Diesel) and Brian O’Conner (Paul Walker). Hobbs needs help taking down a group of criminals led by former SAS soldier Owne Shaw (Luke Evans). Letty Ortiz (Michelle Rodriguez), once Toretto’s girlfriend and member of the group from the first two films, has reappeared with Shaw’s crew. Toretto assembles his team, made up of the diverse cast of characters we’ve met in the previous films, and heads out to stop Shaw and get Letty back, even though she has apparently switched sides. 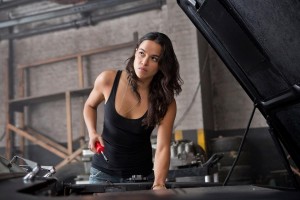 Director Justin Lin understands the type of film he’s making – over-the-top, adrenaline-fueled action, the story pushed forward by explosions, one liners, and twists. Though “Fast & Furious 6” was entertaining and fun, “Fast Five” was a tighter experience; the plot of “Fast Six” focuses on getting Letty back, and the drama built around the main villain isn’t as compelling as in previous films. However, this doesn’t take away from three very well put together action sequences, including the excellent finale (which, as always, requires an immense suspension of disbelief). “Fast Six” also sets up the next film in the franchise with a jaw-dropping post credits sequence, also tying the last few films to Tokyo Drift (which takes place AFTER the other films in the series).

While this type of movie isn’t for everyone, I do think Lin shows his strengths as a director of good action films, where successful execution of the heady ’70s action movie style has been rare since the renaissance of films in the mid-90s. Regardless, the thrills are there, the action is there, and if you enjoyed the other films, you’re in for some fun.