It’s that time of the week again.  Get ready to sound smart to all your work friends with another Foreign Friday.  This week we slow it down a bit and think real hard about life.  Book your trip to Norway for the beautiful and brilliant Oslo, August 31st.

Anders (Anders Danielsen Lie) is a recovering drug addict nearing the end of his stint in rehab.  On August 30th, he is given permission to head to Oslo for a job interview.  With the interview only taking up a fraction of his day, Anders spends the rest of it reconnecting with those that knew him before he entered treatment.  He has been away for awhile and the world of Oslo becomes increasingly difficult for him to understand.  Insecure and surrounded by temptation, he must decide how much he values his new sober life.

Documenting the struggle with addiction is not unfamiliar to cinema, but it is exceedingly difficult.  It is all too simple to make a film about the drugs rather than the people.  Oslo, August 31st is not about drug use, it is about the effect that those drugs can have on not only the user but those that surround him.  The addict’s family and friends carry a uniquely awful burden that manages to both be the same and different than what the addict is going through.  The film is careful not to feature rampant drug use.  Anders does drugs and so do a few others, but they are featured in a limited extent.  The rarity of the drug’s appearance heightens the tension of its involvement.  Like Chekhov’s gun, we know that once drugs appear they must eventually be used, but we cling to some hope; a hope that grows the longer the drugs remain casually resting in the main character’s pocket. 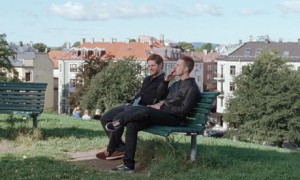 he drug addict must be relatable and honest.  Addiction, a seemingly universal concept, can be difficult in allowing connection to be fostered with the audience.  Too understated or overly bombastic and you will alienate your viewers, leaving them to cry foul.  It is often not a shout but a whisper that announces addiction.  As such the portrayal must be balanced in order to be truthful.  Luckily for the film it has Anders Danielson Lie at its center.  He turns in an elegantly sorrowful performance that is erratically fragile.  He speaks softly and is able to communicate pain with heavy eyes.  Anders starts the film in a dark place and never truly leaves it.  There is no attempt to show him as perfect, instead readily recognizing his many faults.  Spots of happiness occasionally peak out making the hopelessness in his soul all the more crushing.  Unlike many films that thrive by bringing you within the universe, with Oslo you are very much a spectator.  This is a world that you do not want to be a part of, whose inhabitants have no choice in the matter.  Anders is imperfect as he readily should be.  No matter the growth he may have experienced in his recovery, he will always be shackled to this demon.  The inner struggle is expertly conveyed through what isn’t said and the lack of exposition is refreshing. 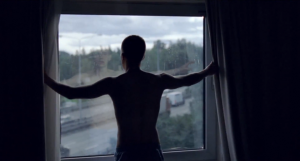 Director Joachim Trier makes strong choices in style that are never distracting.  The beginning of the film has a documentary vibe in its description of Oslo.  There is forethought at work in describing a city that a large part of the world is barely aware of.  It instantly connects us with the setting and will subconsciously have you linking portions to your own life.  This being his second film, following 2006’s Reprise, the level of confidence that Trier possesses is awe inspiring.  He tenderly passes the film onto us without expressly stating his intentions.  This is a deeply personal film that will meet each viewer in a very specific and mutable manner.  The ending of the film, which is heartbreakingly inevitable, is most impressive in its final few images.  The shots, shown over near silence, so perfectly bring the film full circle that it will leave you quietly stunned.

Addiction is a deeply personal experience.  From the person with the addiction to all those that are close to it, each and every person will have a differing emotional response.  Conveying this feeling and the multitudes of reactions involved is complicated and treacherous.  Oslo, August 31st is able to navigate these murky waters with impactful precision.  Through a genuinely masterful central performance by Anders Danielson Lie, a sublimely sympathetic character with deep flaws delicately chaperones the film to success.  The camera captures images that dance with beauty.  Joachim Trier’s direction is confident without being overly stylized.  Oslo, August 31st is a chronicle of addiction that never panders and displays the strength of film as a medium to deal with an emotionally complex and distinctly personal story.

Get a whole bunch more from Derek by following him on Twitter @DerekDeskins.