This week’s installment of Foreign Friday is going to ask a little bit extra from you. Normally all I require is that you open your mind to the realm of international narrative features, well this week we are heading to the land of international documentary film…no, no, no, don’t go! If you have chosen to stay, then you are either well aware of the potential treats offered by documentaries, or you just trust me way too implicitly. I now take you to Israel to explore the hidden truths of one man’s grandparents with The Flat.

Gerda Tuchler, at the ripe old age of 98, died. Arnon Goldfinger, her grandson, and the rest of his family were left with the task of cleaning out her apartment. Gerda immigrated with her husband, Kurt, to Palestine from Nazi Germany in the 1930s, and in the 70 years that followed she lived in this same apartment; to put it bluntly, there is a lot of stuff. After days of shuffling through old books and items that can best be described as old lady chic the family has checked out. Unlike his family, Arnon is far too interested in finding out more about his grandparents to throw out most of the items, including copious letters. As he digs and reads he begins to uncover an incredible tale that had long since been hidden. 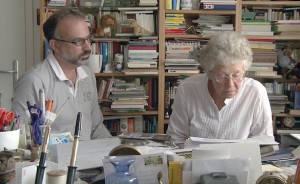 The film has a deceptively slow start. You are ostensibly watching a group of people sift through an apartment that is filled to the brim with items. There are tons of books, stacks of letters and enough knick knacks to drown a carnie. It’s like watching the family prepare for a sad garage sale. It’d be damn near impossible to make this into an exciting piece of filmmaking. Garbage bags rain down from the apartment and the shear amount of crap contained within this miniscule apartment is somewhat impressive. But no one in his right mind would make a film entirely about cleaning out a flat, so it doesn’t take long for director Arnon Goldfinger to get down to business. His need to look deeper into his grandmother’s belongings comes off as annoyingly as it does to the rest of his family. The family chemistry is palpable and you can almost feel them shaking their heads and murmuring, “oh here goes Arnon”. He cannot believe that a woman’s life can be boiled down to just a few items and shows a true passion to continue to get to know his grandmother. His love for this woman is sweet and more importantly worthwhile. Thankfully for us, Arnon would not just throw away Gerda’s letters.

The film doesn’t try too hard to push a message on you, the messages arise organically. After discovering his grandmother’s unknown past, one of the first things Arnon does is to ask his mother why she didn’t know about this. His mother would’ve been aware of these events, there are pictures of the other couple that her parents traveled with, so on some plane she at least knew of their existence. When questioned, his mother reveals the very truth of youth, a lack of caring. She didn’t care to know about these other people, their existence had no bearing on how she lived her life. As children your world is exceptionally small and your viewpoint is decidedly self-centered. You do not look to discover the intricacies of others, you’re too busy figuring out your own stuff. But it is this lack of wonder that creates the mystery. Of course a little girl wouldn’t ask her mother in depth questions about a subject that is not offered willingly. It is a matter of course that deprives generations in youth. We are presented these bastions of leadership in our parents, but we take them for granted. Your parents reside outside the circle of regular people. In a child’s eyes parents are as interesting 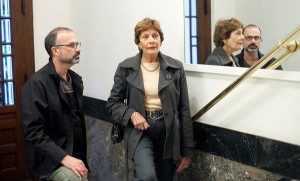 as they need to be and that is all. The thought that your parents are people that lead and have led full lives is something that does not occur to us until years down the road. The film is able to illuminate this so subtly that I’m not even sure it notices.

The other intriguing point of the film of course has to do with a further understanding of our parents. We have a set image in our minds of the people our parents are. To question that vision is absurd and borderline blasphemous. It is as if you spent your whole life being told an animal is a dog, only to later be instructed that it is in fact a cat. Years have told you otherwise, so why should you change your belief now? When we approach others we have a mutable understanding of them, but with our parents, the understanding is concrete and we stubbornly refuse to stray from it. The film inspires the thought that to continue this mentality is to go through life without the whole picture. You must be open to the idea that things are not as you always thought them. You should search out a truth and not merely accept it.

Years of experience tell us that things are not always what they seem. Don’t judge a book by its cover, that’s just the tip of the iceberg and a host of other clichés have been drilled into our heads for years. The Flat may be the clearest reason to heed this lesson. Arnon Goldfinger starts simply in the attempt to clean out his grandmother’s apartment but ends up opening a box full of secrets. His discovery is our discovery and his search results in a questioning of his established base truths about his grandmother. The film is presented matter-of-factly and in so doing allows a conversation to grow. The story of his grandmother is fascinating but the examination of how we see our family even more so. The Flat is about discovery and the ability to change your viewpoint; it’ll make you curious about the generations that came before you.