Friday is upon us and here at LonelyReviewer that means it’s time for a something other than the English language. Foreign Friday searches far and wide (but honestly, mostly just on Netflix) to find a little bit of international cinema to help you expand your horizons. This week we head to Denmark for a little comedy, admittedly of the darker and more uncomfortable variety, with Klown.

Frank (Frank Hvam) and Casper (Casper Christensen) are far from mature. The two and their friends are in a state of arrested development under the persistent façade of adulthood. While attending a wedding the two giddily discuss their vacation plans, a canoe trip that is set to include a plethora of vices of the definitively illicit variety. During the party a friend lets it slip that Frank’s girlfriend Mia (Mia Lyhne) is pregnant. Blindsided by the news, Frank inquisitively approaches Mia only to discover that she kept quiet on the subject because she has yet to decide if she will keep the child, unsure of Frank’s potential as a father figure. In hopes of proving his worth, Frank kidnaps Bo (Marcuz Jess Petersen), Mia’s nephew, and brings him on the canoe trip of debauchery. 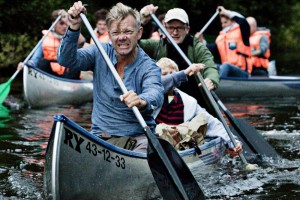 You will absolutely hate entire sections of the film, not because it isn’t assembled well or fails to be entertaining but simply because its characters are terrible people. Casper in particular is the vilest of individuals and I will not find any fault in a person that yearns for the man to have some horrible fate befall him. He is selfish, mean, unfaithful and just kind of disgusting. Frank is like a toned down version of Casper. Possessing far less confidence, he appears to go along with his friend’s actions simply because he is a good friend. But is a good friend to a bad person actually good? I guess it all depends on the loyalty to said friend and the lengths you are willing to sacrificially go in appeasement. There is definitely growth from Frank and by the end a significant amount of distance has wedged between the two characters. Perhaps that is the best measure for the journey within the film. He starts off willing to do all that Casper asks, but by the end he more assuredly makes his own decisions. At first we understand Mia’s apprehension, as Frank is kind of a waste, but by the end he doesn’t look so bad. 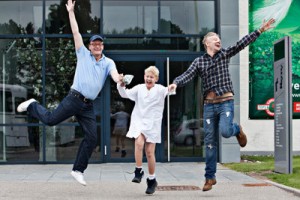 The rude nature of the film is unavoidable. For those that have low tolerances for crude behavior this is not going to be enjoyable for you. Funnily enough there is a gem of nicety hidden under all of the filth. At its core the film investigates the father potential that hopefully resides in all of us. Gross-out comedies are a dime a dozen, but one that is able to balance its depravity with actual meaning are rare. Frank experiences an emotional growth that sneaks up on us as much as on him. His bringing Bo along is an initially selfish act, done to only prolong the life of his relationship, but by getting to know the child he sees that children are just smaller versions of us. It should be out of place and slightly preachy, but is so genuinely posited, and never outright stated, that it works. But just in case you were worried that things get too sappy or filled with those icky feels, the film departs with a slideshow that puts The Hangover’s to shame.

The absolutely great part is that amongst all of the rubbish are some truly funny moments. Indulging in its fair share of schadenfreude, you will spend the majority of the time cringing while also heartily laughing (craughing? linging?). It’s comparison to television shows like Curb Your Enthusiasm or Extras comes a bit easier than pinpointing similarly deployed films. There is a raw truth to the proceedings that makes the characters appear more grounded than your typical comedy. Despite overtly lascivious sensibilities, primarily from Frank’s friends, the actions don’t come off as farfetched as they should. The canoe trip includes stops at ridiculous locations that dare you to challenge their legitimacy. The commitment of all involved, including great performances from Frank Hvam and Marcuz Jess Petersen, who embodies the eternally awkward and shy fat kid in all of us, make for a borderline hilarious film that is just this side of hard to watch. 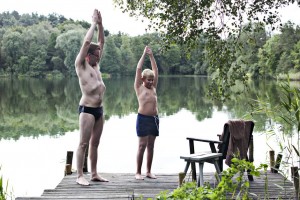 It’s interesting to explore just how much a comedy that features numerous vile acts can actually accomplish. We wouldn’t argue with its success as long as it made us laugh and Klown manages that effortlessly. What sets the film apart from a horde of R-rated comedies is that it takes that extra step to tell a worthwhile story. A kind of adult coming-of-age film, it taps into that innate insecurity that men have when faced with children. We aren’t necessarily scared of babies, just scared that we won’t be able to handle them. There are real stakes on the line here and the film is readily aware of that. At times the film will walk right up to that dreaded line of allowed inappropriateness, but commits to staying on the road of believability. Klown is a disgusting and absolutely funny film and surprises in the depth it possesses underneath all of the garbage.