When you fall in love with film you have to take all of it and I mean all of it. You deal with the good, the bad and the extremely confusing (to say ugly would’ve been way too cliché). As it is summer time, you wade through the deluge of blockbusters. Crawling amongst superheroes, pushing aside animation and contending with the odd giant robot. Amongst all of those multiplex clogging box office juggernauts, the little guys often struggle to gain notice. Many deserve your attention just as much, if not more than whatever sequel is flexing its mammoth marketing budget on your television. Usually they are independent and often lack broad appeal, and Museum Hours is no different; an art film to the extreme, it will make your brain spin in deep thought.

Johann (Bobby Sommer) is a guard at the Kunsthistorisches Museum in Vienna, Austria. He enjoys the quiet his job affords him as well as the artwork that is his workplace. One day he begins a conversation with Ann (Mary Margaret O’Hara), an American attending to her ailing cousin, to help guide her on her way. Ann has never been to Vienna before and finds an unlikely friend in Johann. As he continues to offer her a helping hand, they bond through conversation, sharing stories and indulging in a bit of philosophical musing. 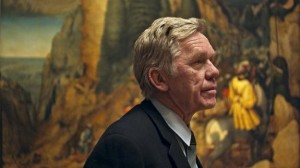 The film starts off under the guise of presenting a simple narrative however this quickly falls to the wayside. Defining the story contained within the film is to do it a disservice. The characters are far from its subject, it is more about Vienna and the museum. Perhaps that is what our characters are meant to represent. Ann, the lost American discovering not only the artwork but the city for the first time, struggles to take it all in. Vienna has so much to offer and wandering around wide eyed and awestruck is possibly the most honest reaction. Johann is a wise, pleasant and exceptionally soft spoken man. The opening shots of him sitting quietly in a chair behind the rope with an expression that betrays none of his inner workings may be his best representation. The museum is filled to the brim with art, primarily of a Renaissance persuasion, and the museum itself simply holds the pieces within allowing the many conversations to develop. The connections are there but director Jem Cohen does not seem all that interested in exploring them, with Johann and Ann occasionally falling out of the film entirely. This is a film focused more on the conversation being held rather than the individuals contributing. 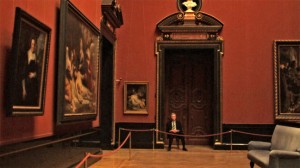 As it is a film about an art museum the art is of great importance. The one artist that Cohen was clearly most inspired by was Bruegel. One extended section plays as a lecture on the artist and a reading of some of his more famous pieces. Fans of Bruegel will be able to more fully participate but most viewers will be forced to the role of onlooker, silently sitting back and taking it in. We are offered glances at the work being discussed but never long enough looks to be able to adequately form an opinion on the analysis provided. While interesting, as most deep conversation of art is (oh look, a film review), we are being talked at rather than to. It is like having a professor give a master class on an artist to a group of freshmen at college orientation. That sounds right but I have no real way to participate in what you’re saying. What is more interesting is how Cohen then chooses to apply his reading of Bruegel to the rest of the film. Now that we have this idea it is applied to the way that we see Vienna. It makes the rest of the film visually interesting and is a different way to push a certain viewpoint on the audience. Nevertheless, it would have been more enjoyable to come to this way of seeing naturally, rather than receiving a lecture and then having no other option but to draw connections between the analysis and the following moments. 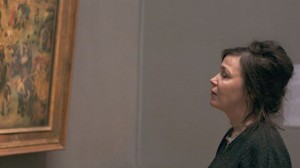 The film is shot wonderfully with frames full of beauty. However, as a film it isn’t completely satisfying. It is contemplative to the extreme and requires your brain to fully participate during and after. Johann and Ann are introduced and dismissed seemingly at random. The comatose state of Ann’s cousin is nothing more than an impetus to get her to arrive in Vienna. In fact, she seems to have very little concern over her cousin’s well being and uses her sickness merely as an excuse to explore another country at a slow point in her life. Johann is the more interesting of the two but even he remains an enigma to us. The two share conversations that feel similar to Before Sunrise minus the romantic tension. The characters are introduced to offer the film some structure but at some point it appears that the writer-director decided to throw that aside to make the stream of consciousness film that he had actually wanted. One segment in particular, featuring a nudity stricken museum, is decidedly out of place and borders on Lynchian. The conversations are thought provoking and the images captured dense in their complexity, but it all feels slightly lost.

Films that feature deep intellectual discourse and exploration are inherently difficult. They force the viewer to, at the very least, watch an analysis and representation from the singular viewpoint of its writer and director. Museum Hours is an extension of its creator and like the individual, its challenging nature can be divisive. Often it feels like the art within its titular museum; a wonder to behold yet requiring of a journey to acquire understanding. The choice to provide a lecture on Bruegel is heavy handed and cripples the film’s later attempts to establish a connection. As the film progresses, its focus wanders and while it may be sure of itself, its viewers are less so. It succeeds in stirring your brain, especially in its introduction of a different way of viewing our surroundings; however it falters before registering as complete. Museum Hours raises interesting points and will force you to explore deeper philosophical ideas but its overabundance of thoughts and borderline pretension is alienating.