For a film to entertain can be tough. You aren’t going to reach everyone, but at the very least you can make something that will tickle the fancy of a good chunk of the population. So when a film sets out to not only entertain but also educate, it is taking on an entirely new challenge. Years of schooling has taught us to cringe at the very thought of being sat down to learn. Like the assigned reading of high school, it isn’t that we think the book will be bad, we just hate being told what we must read and at what pace. There is that selfish vision of freedom that can cripple what is nothing but intellectual growth. When I say that The Act of Killing will capture your attention and teach you something, don’t shudder; just sit down and shut up because this is something that you need to know.

In 1965, the first president of Indonesia, Sukarno, was overthrown by one of his generals, Suharto, following the failed coup of the 30 September Movement. In the aftermath, local gangsters were promoted from ticket scalpers to the leaders of death squads. They killed all those deemed to be communist and additionally extorted Chinese citizens, killing the ones that refused to pay. Instead of the story ending with these murderers being brought to justice, they remain in power to this day. On the side of the victors, they are not derided as criminals but celebrated as national heroes. Anwar Congo, one of the most renowned of the killers, having claimed responsibility for at least 1000 deaths, walks the streets as a celebrity. To show the extent of their actions, Anwar and others were asked to recreate and film their heinous actions.

In concept alone, this is one of the most shocking films I have ever seen. I can’t decide which is more upsetting; the fact that this occurred or that I had not heard anything about it. As an American we tend to not worry about events when we are not involved. We know the extent of Nazism because we were part of World War II. We care about it because we were there. We were not in Indonesia. This was an internal conflict, so why should we bother to educate ourselves on it? This thinking is pigheaded and just plain wrong. What occurred in the 60s was more than a travesty, a crime against humanity where the criminals won. As the film presents this world to us, it defies logic. The existence of this place and the thoughts of its people baffle us as outsiders. The death squad leaders recount their actions with smiles, proud to let you know just how well they murdered a huge segment of the population for little more reason than a few bucks. For it should be noted that these gangsters were not steadfast believers in the new regime, just working for the guy with the highest offer.

Director Joshua Oppenheimer has not only bravely chosen to shed a light on this horrid affair but has done so with an inventive and unique concept. By having these proud murderers not only regale us with the stories of their villainy but offer up recreations as they remember it, it is a glimpse directly into the mind of the devil. There is a shockingly high level of commitment from all those involved, from the government leaders to the everyday citizen. The people of Indonesia are cast in the gangsters’ films and take on the roles of the persecuted with aplomb. The tears are fake and the screams merely scripted, but this is far from an amateur production. The reactions feel all too real and it is as close to witnessing the atrocities as we can get. The sadness and fear that is communicated is horrific and unsettling, but is trumped by the excited grins adorning the gangsters’ faces. Few are upset by the reenactments, most are excited to recount that while these appear similar, in actuality it was all the more gruesome.

The most revealing portion of the film is the internal struggle of Anwar. As he begins the film, his perma-grin will make you hate him even more. He struts through the streets with confidence, more than content in his existence. However, more than any of the other gangsters you can see what is left of his heart begin to erode as he sees the playback of his film. The biggest change comes when he takes on the role of one his victims. It is too much for the man. He believes that he has now felt the grief of those that he had so joyfully struck down. As Oppenheimer reminds him 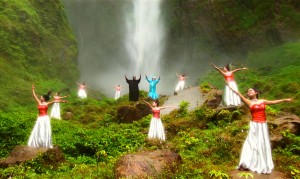 that he has no idea, as Anwar was merely acting while those that he killed were forced to look into the eyes of death, he is forced to look even deeper into himself. He is sapped of his exuberance. The dancing slayer is gone and replaced by a beaten old man that is unsure of whether or not he has sinned. He is literally moved to sickness, heaving at the thoughts of what he has done. It isn’t so much a humanization of a self-proclaimed sadist, for to feel remorse for this man would feel absolutely wrong. There is just a hint of vindication. Perhaps this has made him realize that what he has done was wrong, and regardless of whether this changes him or not, at least he possesses more awareness.

I could continue on about the film for ages. It presents a deeply complicated and inherently flawed world.  A place where gangsters rule and are celebrated for their terrible ways. Where the bad guys won and live to lord it over the world. It can often be hard to determine what is truth and what is recreation. This is a world that defies explanation. Your mind will struggle to accept that this is an actuality. Everything we have been taught argues against it, and in that very way shows our own ignorance. This is an example of something that can only be accomplished in film. The gangsters revere American celebrity and crave a version of it so fully that they do not hesitate to create their own film, unaware of just how awful it will reveal them to be. The Act of Killing is masterfully crafted and disturbing in the exact way it has to be. Put aside your trepidation at foreign language films or documentaries; this isn’t a film that you should see, it is a film that you must see.

Derek has plenty more to say about film. Follow him on Twitter and get it all @DerekDeskins.

One thought on “Film Review: The Act of Killing”