They say that absence makes the heart grow fonder, so you guys must be in love with Foreign Friday. After a couple weeks devoid of repertory foreign film writing (although we did talk about a couple new foreign releases last week), we are back to address your international appetites. With our return we head to the land of katanas, robes and topknots. That’s right, it’s time for a samurai film. Come with me to Japan as we explore honor and tradition with Hara-Kiri: Death of a Samurai.

Tsugumo Hanshiro (Ichikawa Ebizō XI) arrives at the gates of the Ii clan. He is there with but one simple request that he may be allowed to perform seppuku, or ritual suicide, in the clan’s courtyard. The inhabitants are taken aback, expressing confusion and worry in the request. Hanshiro is allowed to confer with Saitō Kageyu (Kōji Yakusho), the senior Ii retainer. Kageyu expresses his concern and attempts to deter Hanshiro from his plans with the story of a similar ronin who painfully met his end following an insincere request. Hanshiro reconfirms his intentions, while the Ii clan is unaware of his complicated past. 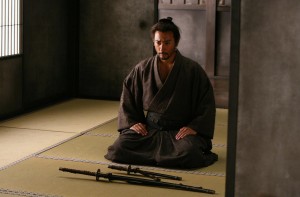 Often samurai films take place in a time when the samurai meant something. He was a warrior, a keeper of the peace, a person to be both revered and feared. Regardless of code or honor, a samurai was an instrument of war. As such, peacetime was the worst thing that could befall a samurai. Your once inarguable worth was now questioned. Swords can be packed away when not in use, but a person cannot simply sit and gather dust. We’ve gotten glimpses of this world, for in film it can be more exciting to follow the unaffiliated ronin than the retainer samurai, but this film is exceptionally interested in the poverty of the ronin. Admittedly, it isn’t the first time, since this is a remake of Masaki Kobayashi’s Harakiri, but it doesn’t stop it from feeling fresh. 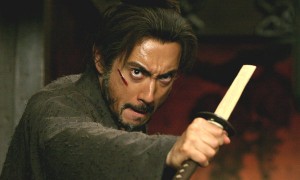 Director Takashi Miike shows an appreciation for early Japanese cinema. He isn’t so much concerned with offering a different twist with the remake, but rather updating it visually. As he did with 13 Assassins, he embodies the tone of the great works of Ozu and Kurosawa while maintaining his own voice. The direction is smooth and unobtrusive, often limiting the camera’s movement so as not to distract from the drama. The scenes within the Ii compound are eternally tense. The stare of Hanshiro is unshakable and Kageyu is perpetually attempting to understand the warrior at his feet. Miike is not afraid to present Kageyu as a complicated man. He is loyal to his lord, but you will witness an honorable samurai who struggles to follow his occasionally troubling orders. Miike handles the melodrama well but, like much of his work, excels in the action. While his name will conjure images of shockingly brutal violence, Miike seems less concerned with the amount of blood on display this time around. The scenes of ritual suicide focus more on the samurai’s eyes than the wound he is inflicting. It is his way of showing that the death itself is not the most important; rather it is the choice of the samurai and the strength of conviction. 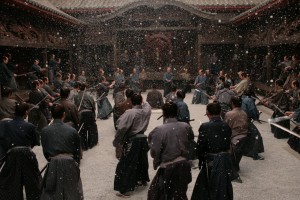 The film has its slower parts, especially in exploring the poor life of Hanshiro. While these moments are important, the other characters are not as well drawn as Hanshiro. His daughter, Miho, never manages to be more than a symbol and his son-in-law is made too weak by youth and love. The two never truly feel like adults and even by the end, seem to have not grown since they met as children. When the setting returns to the Ii compound it is at its most intriguing. As the final battle gears up it’s as if not even the sky could resist the excitement, with a gentle snow lighting upon the many samurai. The fight itself is a marvel of fantastic choreography. Ebizō commands such respect in the slightest of movements. As he is first struck with a slice across his face, his look is not that of madness but ultimate devotion. With a gleaming smile, we understand that this is a man with nothing to lose in life and everything to gain in death. He fights these men for his entire family and for the honor of all samurai. 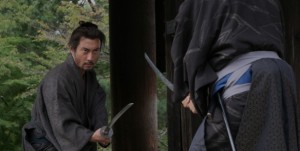 The film’s subtitle is a bit misleading. While, hara-kiri is certainly a personal act and involves the death of a samurai, it is not what the film is about. Instead it is concerned with the honor of the samurai. The strength of the warrior’s character is what has come to define them and the reason we remember them with such respect. A denigration of the feudal lord system within Japan, the film shows the weakness that wealth can cause. Hara-Kiri: Death of a Samurai is a samurai film that yearns for the core values of its subject. Takashi Miike seems unconcerned with the troubles of a remake, and crafts a film that is immediately his own. Although portions are slowed by weaker supporting characters, the strength of the film’s central actor assists in bolstering the message. As the film comes to a close it becomes evident that Hara-Kiri: Death of a Samurai is not about the death of one samurai, but the death of the entire construct of the samurai way.