You know how to read (otherwise this all looks ridiculous to you) and you love to watch films, but for some reason or another you rarely put those together. Welcome to Foreign Friday where we respect your intellect enough to expect that you can do both at the same time. Venturing outside the comforts of your own home (but not literally, because that couch and Netflix are just so comfortable) to find the international fare to wet your cinematic appetite. This week features a police story that is nothing like the world of Law & Order; come along to Romania for Police, Adjective.

Christi (Dragos Bucur) is your average police officer. Far from being stretched too thin, he is focusing on one ongoing case. Following a tip, he is investigating a teenager accused of supplying his friends with hashish. The further his investigation goes, the more he begins to question it. In a quandary he must decide whether to enforce the letter of law or do what he feels is right, all with mounting pressure from his superiors with little care for his ethical dilemma. 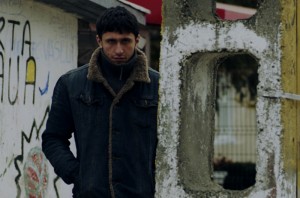 We’ve been conditioned to expect a specific thing when we hear police story. I’m talking chases, evil villains, gun fights, sirens, mayhem and a general sense of justice-y danger. The thing is, outside of television and film, the life of a small town police officer is probably more like Chief Wiggum’s. In modern cinema, Hot Fuzz may stand as the best example of actuality versus fantasy. Before it all goes south and the town turns into a world of John Woo gun fights and Michael Bay explosions, the quiet town of Sandford is basically crime-free and the police officers live lives of leisure. Police, Adjective certainly lives on the sleepier side. It’s a conscious choice, one that highlights the more tedious aspect of police work.

The problem with a film that explores the less exciting aspects of police work is that it is often as boring as it is for the people involved. Writer-director Corneliu Porumboiu is fearless in his presentation. Long stretches of silence stretch out within the film. We quietly watch Christi observe his subject, taking down copious notes. Initially this is confusing and leaves the audience curious as to when something will actually happen. The contemplative nature grows less obscure as the film progresses, and a connection to Christi gently reveals itself. It is impressive how subtly Porumboiu endears Christi to his viewer. In the final confrontation with his superior, a man that we have only heard spoken of in anxious tones, is somewhat difficult to watch. We are aware of the work that Christi has put into his investigation, but his superior just doesn’t seem to care. When it comes to completing a task, he has failed, and a box remains unchecked. The screenplay and often stationary camera offers a window into the mindset of Christi and it has established a connection that has you understanding his thought process. To see it systematically demolished with apparent ease takes a toll on your soul.

The ending is what ultimately rescues the film from its sinking doldrums. While the images are presented simply, by residing only with Christi, events acquire an artificiality. Since he is often our only character we empathize with his struggle and adapt his very own mindset. Although the word police is right in the title, the film is so insular that you often lose awareness of Christi’s very occupation. In the end we are yanked by the ankle back to Earth and must face the very simple fact, that the very thoughts we have been mulling over aren’t ours to have. It does not matter whether you believe laws will change, or that the crimes being carried out aren’t as morally corruptible as they are touted to be. Just as the criminals, in their lack of polish or exceptional flash, do not consider the ramifications of their actions, we cannot do so for them. Yes, this arrest will upset their very life plan, and most likely have consequences that they carry with them for their entire existence. But that is the choice they have made, and as a police officer, it is Christi’s obligation to fulfill his role. It is an interesting flipside to the typical police trope of the loose cannon cop ignoring his orders to do what is right. This is a fantasy and Police, Adjective is a spoonful of reality that shows that at the end of the day, most officers are forced to do their job, regardless of their personal beliefs. 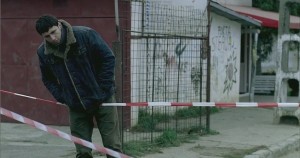 Police, Adjective isn’t an exciting film by any means. It challenges your preconceived notions of a police film. Much of the film is spent following Christi as he follows his subjects around. Time drags on as he relentlessly scribbles in his notebook, observing a set of the least menacing criminals. Admittedly, much of the time, the film bores its viewer. However, by the end it reveals that it may have been doing all of that on purpose. As Christi’s world view is systematically demolished before our eyes, it is disheartening yet inarguable. Police, Adjective is an ethically challenging police film whose dearth of quiet moments yields a satisfaction and understanding that is apprehensive to show itself. Like Christi, it will linger and force your thoughts to dig deeper, with a grounded ending that will frustrate idealists.

Looking for a film from your homeland? Let us know and be sure to follow Derek on Twitter @DerekDeskins.