The film parody is a complicated creature. Rather than being a binary system, there are now varying degrees of parody. The label alone is now used sparingly and is nearly synonymous with poor quality. The Scary Movie franchise has taken over, with a swath of pop-culture references and lazy titles left in its wake. Rather than explorations of the comedic potential of the more serious, trading in foreboding for the ridiculous, they have devolved into apparent cash grabs that lazily skewer whatever is currently relevant. Jason Friedberg and Aaron Seltzer are the biggest culprits in the devaluing of the parody, although perhaps we are also to blame with the internet and 24-hour news cycle fueling our need for immediate satisfaction. Either way, Friedberg, Seltzer and irrelevant multiplex fodder go hand-in-hand. It was with great excitement that I approached Hell Baby, a horror parody from Reno 911! and The State alums Robert Ben Garant and Thomas Lennon. Unfortunately my hope for parody relevancy was only further thwarted by their efforts. 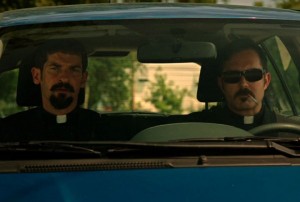 Jack (Rob Corddry) and Vanessa (Leslie Bibb) have just moved to New Orleans and are looking forward to starting their life together. Unfortunately for them, they managed to choose the most haunted house around. Quickly, Vanessa starts acting strangely and we’re not talking typical pregnancy strange. Jack tries his best to ignore his wife’s new ways and the odd developments within the house, until it becomes too much to bear. Lucky for him, two priests arrive to exorcise the hell out of that demon. 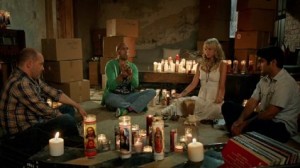 The modern film landscape makes it difficult to pin down the very definition of parody. The Freidberg-Seltzer doldrums have come to define what the genre has become. When we think of parody now, it is accompanied with self-referential and pop-culture heavy humor. Often they don’t even stick to the one particular genre it sets out to lampoons, and hops around to the many aspects of modern films in general. The horror genre alone has evolved into a massive field that encompasses found footage, haunted houses, ghost stories and supernatural monsters. Defining oneself amongst the many options in horror alone is quite difficult. Other horror parodies have faltered while trying an omnibus method, making sure to check all the boxes of the current popular horror tropes. What Hell Baby does right is limit itself. It is exorcism meets haunted house and it stops right there. It isn’t interested in exploring the found footage milieu or any other current horror hot topic. In this way, it does manage to encapsulate that universality of great parodies. It isn’t a film shackled to 2013, however that doesn’t necessarily make it good.

The benefit of parody, is that it allows us to laugh at even the most dire of situations. Nevertheless, the jokes still need to be good and they just aren’t in Hell Baby. Its most persistent struggle is its own self indulgence. With such a simple premise, the film certainly has a lot of useless characters. Perhaps Garant and Lennon just wanted to hang out with their friends, but regardless they overpopulate the proceedings with one-note characters that contribute very little. In fact, the lack of material leaves many of the actors underused. Scenes are less about entertaining or assembling a coherent story, with a greater concern on making sure to get as much screen time for its talented cast. Rob Huebel and Paul Scheer repeatedly pop-in as curious police officers, but their existence is unnecessary and lacking laughs. Many scenes just go on too long, with a sensibility that if it goes on just a bit longer maybe it’ll earn a chuckle. It becomes a struggle just to get through the necessary plot points. Garant and Lennon latch on to all the wrong things and wring the perpetually dry comedic towel of any semblance of moist hilarity. Repetition of an unfunny moment only leads to more unfunny moments.

It is all just one big lost opportunity. The cast is fantastically talented. Rob Corddry plays straight man exceedingly well and is often a breath of fresh air amongst a cloud of smoke. Keegan Michael Key does what he can with F’resnel and manages to make lunacy riddled premises at least passably believable. However, no amount of wondrous casting can yield quality with a script this poor. The gross out moments are laden with wretches that never flirt with giggles, and their frequency only heightens the disgust. There certainly are some interesting premises within the film, but the lack of further exploration only displays an ignorance of its own potential. A film about the badass traveling exorcists is eminently more enjoyable than what we are left to deal with and had me dreaming of a much better film. As the film closes it appears to become self aware with a moment that nails the comedic potential of parody. But at this point, it’s just not going to work and it falls right into line as it continues to be expectedly derivative.

A film should never expect to survive on its label alone. Shaun of the Dead works not only because it is a marriage of horror and comedy (it should be noted that the entirety of the Cornetto trilogy are not parody, they just aren’t), but because it doesn’t simply mine the zombie genre of all of its potential jokes. It utilizes the horrific setting to present a comedic alternative to its more dramatically minded brethren. It is funny because it puts forth solid comedy. The difference between the gags within Airplane! and the modern day parody, of which Hell Baby is certainly a member, is quality. It is the difference between a successful stand-up and a comic aping another’s style. Instead of taking the time to ensure that every joke is worthwhile, Garant and Lennon rely on a string of rapid-fire and lackluster gags. There is certainly a lot going on, but I don’t care to see any of it. Hell Baby has the pedigree to rescue the parody from what it has become, but it inevitably succumbs to genre’s current problems. It throws everything at the board in hopes that something will stick, but only manages to cover the floor in garbage.