International receipts are growing in importance. The box office used to be won and lost on American soil but things are certainly changing. Pacific Rim may have underperformed domestically but with an Asian market ravenously consuming it, sequel talks have managed to germinate. This is having ramifications that extend past franchise salvation and is actually changing the content of the films produced. Both Looper and Iron Man 3 took little detours to China and even released different versions that played up the importance of the country.

While soccer (excuse me, football) catches some traction in the States, most of the international sports (I’m looking at you, rugby and cricket), continue to elude us. With NASCAR having the automobile sporting locked down for the red, white and blue, we pay little mind to Formula One, but it looks like cinema is trying to change that. Cars 2, when it wasn’t getting all espionage-y, featured a plethora of Formula One races (admittedly with the wrong car models), and the documentary Senna was a critical delight with a decidedly international focus. Rush is the latest addition, deftly capturing the sport’s tension and acting as a reminder that Ron Howard can actually direct. 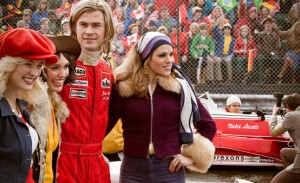 James Hunt (Chris Hemsworth) is good-looking, womanizing, hard-partying and charismatic. He also happens to be exceptionally good behind the wheel. As he cuts his teeth on the Formula Three circuit he encounters Niki Lauda (Daniel Brühl). Lauda is Hunt’s opposite; a rat-faced and socially awkward technical wizard that favors calculation to Hunt’s gut-feeling. In the two’s first race against one another, Lauda offers Hunt his first real competition. After a spinout finds Hunt the victor, a rivalry is born. Over the next few years, both Hunt and Lauda would ascend to the field of Formula One racers. Both with exceptional abilities, their rivalry enters the world stage as they compete for the World Championship.

Ron Howard’s recent stints in the directing chair have been pretty lackluster. Shackled to a duo of Dan Brown adaptations plagued by Tom Hanks with Nicolas Cage hair, and the comedy spiral that is Vince Vaughn’s career, it’s been a while since Howard has produced anything of any kind of cinematic note. We got a glimpse of the Howard of Apollo 13 past with Frost/Nixon, 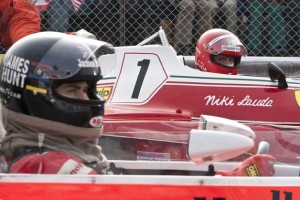 but even that was a bit of an unexceptional slog. It was starting to look like his best work moving forward would be to just stick to narrating any future incarnation of Arrested Development. In Rush, Howard proves that he hasn’t lost the ability to fully captivate cinematically. The races alone are a marvel to behold. The camera captures the kinetic energy of the races fantastically, yanking you excitedly to the edge of your seat. Rather than succumb to incessant cutting under the belief that it’ll elevate tension, Howard confidently assembles shots that sacrifice no continuity in the quest for elated thrill. The races are perhaps the most strikingly breathtaking pieces but they are far from the film’s only good quality.

This, by all rights, should be Chris Hemsworth’s film. With a strong following of Marvel fans and plenty of people

who just want to see him take his shirt off, he is the biggest name attached. While Hemsworth does a good job as Hunt, oozing the kind of entitled, high-school-level jock charm the role requires, he is outshone by Brühl. Taking on the largely thankless role of a too-smart-for-his-own-good asshole, that also happens to be unquestionably talented, Brühl takes a character that should be absolutely detestable and makes you kind of like him. In all actuality, we should probably hate both Hunt and Lauda. Both were leaders in their sport, especially Lauda, with awful personalities that rely most heavily on a selfish mindset. They care little for the impact their actions have on others and are typically only concerned with their own success. Yet, both Hemsworth and Brühl find the good in each and manage to eek it out without slapping you in the face with it. They hate each other, often out of jealousy and a bit more familiarity than anyone would be comfortable with, but neither is ever touted as the out-and-out villain. The script from Peter Morgan, who admittedly played in this same sandbox in Frost/Nixon, certainly deserves some of the credit, but Hemsworth and Brühl are the ones that make these men real and more than simple historical caricatures.

For all that the film gets right; it nearly manages to ruin it all in the end. Throughout there are some moments of exposition and obvious biopic notes that ring less than true, but they are all covered in the gloss of emotion and excitement that they can be easily ignored. However, after the film ends well, it decides that the audience may not have gotten the point of all of this. So it circles back, bringing the two leads together to make sure that there is no ambiguity over the film’s intent. After boiling all of the flavor out of its own message it proceeds to spell it out so succinctly to be borderline offensive to those watching. It ends up being an unfortunately bitter aftertaste that nearly blinds you to the delicious meal you just enjoyed.

Rush doesn’t really care about your disinterest in Formula One. It utilizes the sport as the backdrop for a character drama beautifully. Under the skilled and watchful eye of director Ron Howard, who further shows that he must have been just messing with us with those Da Vinci Code films, the film captivates from beginning to end. The race sequences alone are a wonder to behold, a bastion of measured reserve and ecstatic energy, they jolt your heart forward like the cars on screen. Chris Hemsworth and Daniel Brühl embody their respective roles, with Brühl shining especially brightly. Regardless of its upsettingly mishandled ending, Rush is exhilarating and surprisingly even-headed. It manages to tell a captivating story with an authenticity deeply rooted in ambiguity.