I think at this point it’s safe to say that I watch Rob Zombie’s movies because of The Devil’s Rejects.  That film, for all of its terrible sleaziness, was really, really well made.  You can argue the merits of its message, the idea of who the heroes are, but you can’t argue that Zombie had a vision and saw it through, executing it very, very well.  That film bought him a lot of sway with me.  Unfortunately, the two Halloween films between Rejects and Zombie’s latest film, The Lords of Salem, ate away a solid chunk of that good will, even though they were “mainstream” movies that probably had a lot of studio notes on their way to the final prints.  Here’s where I stood as I popped The Lords of Salem into the DVD player: cautious confidence and hope in a director who seems to do better with original content.

And here’s where I stood as the film’s credits rolled: still confident that Rob Zombie can direct and has a good horror movie in him, but unfortunately The Lords of Salem isn’t that movie.  Now, it’s not terrible, and it’s certainly not a mess.  If anything, Zombie is getting better and better as a director.  There’s confidence in his direction and The Lords of Salem shows it off well.  In fact, I’d argue that this is Zombie’s best looking and best shot film to date.  His use of the camera, light, and music creates a truly unsettling environment for the story in the context of the film’s visuals, Zombie made The Velvet Underground’s “Venus in Furs” sound even more jarring).  The problem comes from the film’s story or, more accurately, the lack thereof.  The Lords of Salem’s story feels more like a loose thread with which to hang creepy images and hangs so threadbare in the background that the film ends up feeling like an overlong music video.

The story follows Heidi, a Salem, Massachusetts DJ who receives a cryptic wooden box at work which contains a vinyl record by a band called The Lords of Salem.  The album’s music ultimately unleashes an ancient coven’s curse upon Heidi’s bloodline, pulling Heidi into a world of witches, curses, devil babies, lots of messed up Christ iconography.  Like I said, the story is light, and seems to exist to show off this world that Zombie has in his head.  As standalone scenes, the images Zombie shows off are grim and unsettling, and never veer into the disgusting-as-a-scare tactic.  They’re fantastic and fully realized, paying homage but still being original.  But you can’t just put 100 minutes of off-putting, loosely-connected scenes together and call it a movie.  If you’re telling a story, those scenes need to serve the story.

And I can’t get past the fact that story is the biggest issue with the film.  The dialogue is spotty and succeeding depended on the actor or actresses delivering it.  Judy Geeson is great in the film, adding just enough cartoonish flair to chants of “Satan!” to make it both believable in the moment, but not so sincere that it comes across as silly.  And Bruce Davison, as the audience surrogate, does a great job moving the plot along and actually comes across as quite grounded amidst the growing witching chaos.  Sherri Moon Zombie as Heidi is, uh, well, Sherri Moon Zombie.  If you enjoyed her acting in any of her husband’s previous works, you’ll be fine with what’s here.  You definitely aren’t getting anything new. 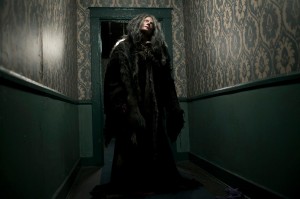 In the end, The Lords of Salem left me feeling a bit meh.  The film has focus, but it’s just in the wrong places.  It looks like the 70s horror films that very clearly inspired Zombie, but in a way that’s both a homage and distinctly Rob Zombie.  The Lords of Salem isn’t a step back in terms of direction, but the lack of story focus puts this film under The Devil’s Rejects.   There’s just not enough story to sustain the great visuals.  But the directorial work by Zombie is assured enough that when his next movie comes out, I’ll see it.  The Lords of Salem shows that Zombie still has way too much potential to not continue giving him a chance.