Blue is the Warmest Color expands to Boston today, November 1. Check your local listings for showtimes.

Film festivals have certainly undergone quite a change in the last twenty years. Festivals were the haven of film critics and devout film fans on a quest to unearth the next great film. Sure, they still exist as locales of discovery, but the internet has greatly altered the way they are discussed. Festivals were like that smart nerdy kid, the one that was your friend and was filled with great insights, but most people in your school didn’t even know existed. Now they have been She’s All That-ed (just go with it), the inquisitive glasses stripped away and replaced with a popular sheen. Cannes, a supremely French film festival, resides in the realm of common knowledge, a place that even The Today Show will go for coverage, but its own sensibilities remain surprisingly unchanged. Blue is the Warmest Color makes sense as the most recent winner of the Palme d’Or, but that title means a lot more than the hype.

Adèle (Adèle Exarchopoulos) is a beautiful 15-year-old girl with plenty of friends. On the surface she appears to be living quite a decent life, a popular high-school student with a passion for literature. However, deep down something is missing. She goes through the paces of young love with a cute boy, but it never seems complete. While walking to a date she catches sight of a blue-haired girl, Emma (Léa Seydoux), and promptly gets her stuck in her head. The encounter appears to be lost, a path that remained untaken, until one night she runs into Emma again. They strike up a conversation and quickly fall into a deeply passionate love affair. The relationship with Emma is Adèle’s first true dalliance with love, and through it she loses and finds herself. 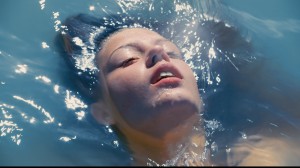 Blue is the Warmest Color excels in its characters. All of its characters, even the most minor, are established carefully and deeply. Unlike many films that deal with teenagers, the believability of the people is not to be brought into question. These people act like teenagers, because for most, they are teenagers. They speak frankly with one another, eliminating the walls and platitudes that are more closely associated with measured adult conversations. The interactions are organic and it creates a closeness with the characters. This is a film specifically about Adèle; the film is not concerned with how you ultimately feel about the girl, instead much more with your understanding of what makes her tick. From her attempts to fit in with her peers’ expectations to the passionate erotic moments with Emma, we know who Adèle is. By the end, Adèle is no longer surprising us, because we know who she is; anticipating her decisions before she even makes them.

Both Adèle Exarchopoulos and Léa Seydoux deliver performances of such raw honesty that it is nearly uncomfortable to witness. They transcend the very label of acting, and deliver performances that are lived-in and convincing to the point of blurring lines. Exarchopoulos invokes such childlike wonder and ferocity into Adèle. She communicates all aspects of her life with reckless abandon and ultimate passion. Adèle does not simply eat her food, but devour it with a ferocity that is later seen in her ravenous consuming of Emma. 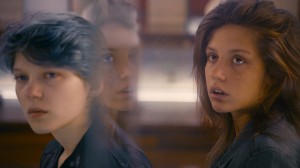 This immaturity never leaves Adèle. While she may move on to develop a career, whenever she is around Emma, she becomes a lovelorn teenager. Seydoux creates the other side of the coin in Emma. Her actions are measured and methodical. There is a clear plan to her actions that can be glimpsed as soon as she begins to interact with Adèle. The difference in their emotional maturity is their inevitable downfall, with the fevered lovemaking being the one thing that bridges the divide. Oh, and about all of the sex.

You no doubt are aware that Blue is the Warmest Color has received the box-office black spot of an NC-17 rating. Seeing as this is America, the land of openly accepted cinematic violence, it is of course for several extended sex scenes. The first sex scene alone pushes around seven minutes and is not one to shy away from some potentially graphic content. This scene however is absolutely necessary. As I previously noted, Adèle rabidly consumes everything in her life, and other than a healthy appetite, we have yet to see her really let go. Emma fosters Adèle’s self discovery, and we 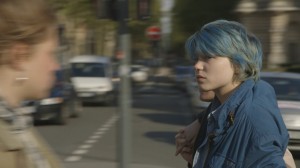 are shown an overflowing of pent up passion. They attack each other with animalistic sexual desire, the only sounds being wet and slurpy. Without the scene, the film does not work. However, this is not true of the latter two sex scenes. These scenes feel like lesser repeats of the former. The motions are repeated as Adèle and Emma continue to lick each other all over, but at this point, it is not adding to the film as a whole. Perhaps it is the prudery of American audiences, but by the time they were gearing up for their third go-around, there were audible laughs in the theater. While the first scene served as an expression of the central character’s inner feelings and as yet unexpressed desires, the two that followed felt perfunctory. There is no growth in their inclusion and we are offered no deeper understanding of the characters. It is gratuitous and unnecessary, appearing to be little more than the heterosexual fantasy of the film’s director. 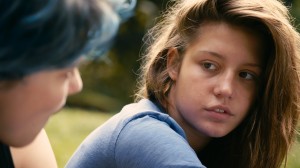 Outside of all of the behind-the-scenes controversy and MPAA challenging sex, Blue is the Warmest Color is a film about the difficulties of growth. Director Abdellatif Kechiche erodes the barriers that separate us from his subject. Much of the film is shot in close-up, bringing us tightly in-line with the person that is Adèle, her face conquering the screen for long stretches. Adèle Exarchopoulos and Léa Seydoux deliver performances overflowing with genuine honesty. Their relationship is never marred by the sheen of the silver screen. In fact, much of the film refreshingly ignores the common cinematic tropes. Adèle is deeply flawed, complicatedly immature to the point of frustration. She has lived for so long without expectations, and this lack of responsibility finds her continually spinning her wheels. While the sex scenes grow repetitious it does not degrade the strength of the central relationship. Blue is the Warmest Color is a complex examination of the mix of growth and stagnation that accompanies love and the film is just as complicated and fascinating as its subject.

One thought on “Film Review: Blue is the Warmest Color”