It’s been 2 years, since my last written review (We Bought A Zoo) and my mind hasn’t changed about reviews. I hate them. I enjoy reading them after I’ve seen the film. Anyways, I was fortunate enough to see Jason Reitman’s 5th feature film at the New Hampshire Film Festival in Portsmouth, NH. He has been lucky enough to be 5 for 5, in my book, at least. The guy sure knows how to pick great source material. This film winds up showing a real maturation in his skills to let the story win over the crowd, instead of any one character or scene or well placed song. In fact, the film is definitely slow in the beginning and I felt like this was going to be boring. That notion couldn’t be further from the truth. Reitman winds up creating a love story-thriller-coming of age film all rolled into one. If you want to see this during this holiday season, then please stop reading right now. 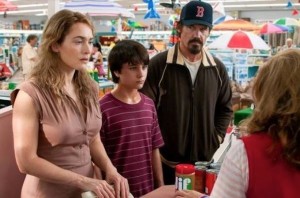 The film is set in 1987 in New Hampshire, but shot mostly in Massachusetts. It is based off of Joyce Maynard’s 2009 book. It opens with narration from Tobey Maguire who is the adult version of the protagonist, Henry (Gattlin Griffith). He speaks a lot about his mother, Adele (Kate Winslet), who seems to be suffering from some sort of mental illness. We see Adele in her home and the narration tells us that she wants to be left alone. In flashbacks and narration, we find out very quickly that Henry’s father (Clark Gregg) has left Adele for his secretary. It isn’t later in the film, until we find out more about that.

Adele is a broken woman in the early scenes of the film. With little to no makeup, she seems like a shell of her former self. It is quite depressing to watch and accounts for the slow pace of the beginning of the film. On a whim, Henry and his mother go shopping for clothes. It is in this mundane life experience that sets the course of events.

Henry breaks off from his mother in the clothing store to go look at magazines with women on the covers. As he picks one up, a woman walks by and he quickly puts it down and walks over to the comic books. He is soon approached by a man (Josh Brolin) bleeding through his shirt. This man, Frank, asks Henry for a ride. Henry brings Frank over to Adele and they both decide to leave the store quickly before any suspicions arise. It is in this moment that Frank says that he was having appendix surgery and jumped out the window of the hospital.

Adele takes Frank into her home. It is here that he soon takes control of the home and his first step is by making some chili. Yes, you read that right. The look on Adele’s face as Frank feeds her while she’s tied up is an interesting precursor to what is going to happen. Frank reveals that he was in prison, before Adele & Henry see this on the news. Regardless of this new fact, Adele & Henry don’t feel afraid.

Why? How could a man with a sketchy past not bring fear to a mother and her son? Well, because this man easily fits into the father figure role that has been vacated by Henry’s father. Frank teaches Henry how to play baseball by instilling confidence into him. Frank fixes stuff around the house. And in an interesting scene when “hot-for Adele” neighbor (J.K. Simmons) comes by with some freshly picked plums to offer to her via Henry at the door, Frank takes these plums and makes a pie out of them. Not to mention the jealous face that Frank makes when he hears that a gift is being given to Adele.

Throughout the film we are shown brief flashbacks intermittently of a young Frank (Tom Lipinski who looks eerily like a young Brolin. Amazing casting.) with a young woman shown to be in love. Brief glimpses of Frank’s past are shown to the audience to allow us some empathy for him. These flashbacks seem to coincide perfectly with Frank and Adele’s feelings for each other.

We also see the heartbreak and loss that Adele went through with her first marriage. We are shown Adele suffering several miscarriages and in one surreal scene she is either handed her own stillborn or another baby from the hospital. When you see how this all goes down, which is actually a dialog between Frank and Adele, you can clearly understand that Adele is a woman who was abandoned by her husband at the worst time in her life when she needed someone most. Frank easily fills that void because his flashbacks reveal that he killed his wife out of his own jealousies and insecurities thinking that his baby was not his own. He pushes his young wife and she hits the furnace. He runs upstairs and finds that his baby has drowned in the bathtub. He finds himself in prison for these 2 crimes.

What this film sets out to prove is that anyone regardless of their past still needs love and to be loved. It’s about how 2 people can come together to seek forgiveness and to move on in their life because they kind of fill each other’s voids.

Adele decides to run off with Frank to Canada after Labor Day. In an unfortunate event, the police finally catch up that Frank has been hiding out at Adele’s over the long holiday weekend. And in an instant their blooming romance is ripped to shreds because Frank is sent back to prison. I say unfortunate because this film does pull at your heartstrings that you want to see this new couple make it and make each other’s emotional demons disappear.

The film’s climax is an old Frank being let out of prison and being met by an old Adele. It’s an emotional reunion some 20 years in the making. It shows that regardless of prison clothes and housewife clothes, 2 people deserve love and most importantly each other. Not something that you typically see in the movies.

2 quick points in closing. The first is that Frank’s flashbacks are only shown to us as audience members. I asked this question to Joyce Maynard who was in attendance. She confirms that in the book they have this discussion, but in the film Reitman decided to show them as flashbacks and Maynard believes that Adele

doesn’t need to know about Frank’s past. She trusts him. This brings up an interesting point. As audience members, we are also prone to possibly believe that Frank could likely hurt Adele as he did to his young wife. But the chemistry between them is so great and the looks on their faces reveal that they don’t want to repeat their pasts.

The second point is that people pushing for a father figure in the home will probably champion this film. I don’t necessarily agree with this old fashioned concept, but for Adele and Henry this works. And for Adele and the women in the audience Frank can kind of come off as the perfect man. His rugged good looks, mysterious nature, cooking, cleaning and child rearing abilities definitely can seem a bit satirical, considering that this man just came out of prison. People laughed at this very concept. But what draws Adele in most of all, I think, is Frank’s need for a woman to touch and to be touched by a woman and vice versa for Adele. These early scenes show an emotional connection and intimacy being created, while the police search for this “deadly” man that makes this a unique love story.

Frank and Adele just might have the ability to go down as one of the great screen couples. In one emotional scene toward the end of the film, Adele tells Frank that she can’t give him a family. Without hesitation Frank replies, “you already have” and kisses her and embraces her.

There you have it. Now I ruined all of the surprises for you. Well, I didn’t go over the subplot involving the son in his own coming of age story. Anyways, this doesn’t feel like a Jason Reitman film at all and really what does that mean? Let’s try to answer that question when he retires. Although, one could argue that in each of his films, the main character goes through an arc that is central to the film’s overall theme.