To my mind, there’s nothing like a wordless film. Not a silent film mind you, quite the contrary, I mean films that aggressively employ sound effects, score and photography as the primary tools for storytelling rather than droning on with dialogue, telling you everything you should be meant to discover for yourself.  Yes, I think it’s safe to say I was a born sucker for films like the new Robert Redford-fronted survival story All Is Lost, about a lone man at sea shipwrecked by a series of unfortunate events. So take my endorsement of this gem with that advisory in mind: it is not like most films. It’s the story of a man alone with only his sinking boat and supplies to occupy him, and as the storytellers choose to proceed mostly without voiceover narration, it follows that All Is Lost is told with precious few words spoken. As a consequence we learn about the character and his circumstances through observation, echoing his own solitude, but as far as direct access to the character’s thoughts go, we are as adrift as he is.

Movies like this are, to be kind, “meditatively paced” (read: slow moving), and it’s a crying shame for all humanity that this has become synonymous with “boring” these days. Boring is an ill-fitting, audience-repelling word that endangers this kind of film from reproducing, and is really nonsense in the end anyway. Boring implies that nothing happens when in fact it’s the opposite, things are constantly happening to propel the story forward without the conventional and often overused luxuries of voiceover or dialogue. Just watch the first ten minutes of Stanley Kubrick’s 2001: A Space Odyssey or the Coen brothers’ No Country For Old Men and tell me nothing’s happening. Tell me there is any other art form that captures such grand meaning so succinctly. In this way dialogue and voiceover-free cinema is a purist’s cinema. It celebrates film’s singular greatness, distilling it to its nuts and bolts. No novel or poem or painting or stage performance can suspend your disbelief in quite the same way.

I’ve also got to hand it to Redford, still kicking ass at 77 years young, with this affecting portrait of a man under unthinkable conditions, resilient and yet maddeningly human. “Our Man,” as he is described in the credits, who has as many missteps as successes, who behaves at one moment brilliantly and then the next like a fool, who is out of his depth and always one step from salvation or doom. He is propelled by the simple, bumbling will to live. Of course, the other side of this blade is that audience members obsessed with what the protagonist should have done – the “Captain Hindsights” of the world – will be driven mad by it. For all those Monday morning quarterbacks, there will inevitably be much hand wringing over the protagonist’s lack of foresight, preparedness, and reasoning. Normally I might join this derisive chorus but in this case, for me, it was refreshing. There are some movies wherein a character you are pulling for behaves in ways so counter-intuitive (usually just to shamelessly advance a plot point) that it breaks the spell. Suddenly you are not an old man on a sinking boat in the ocean, but once again yourself in a movie theater next to a guy who doesn’t cover his mouth when he coughs. This time though, each mistake is easily rationalized and serves to tell us more about “Our Man” than we could ever have known had he always done things just the right way. This character is a lot like most of us, flawed and ill-prepared for the worst, fallible and short-sighted and surviving the best he can. In the end it’s hard to fault a person for how they manage an unmanageable, life-or-death crisis. In many ways, this character and story are above that line of criticism. 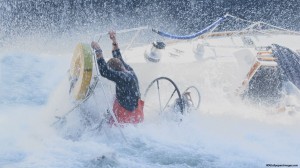 That’s not to say I don’t find fault with the movie. Much like our protagonist, the film itself is imperfect and endearingly flawed. There are times, for example, were we seem to depart from the character’s mind in ways that seem accidental, even lazy. We are not always privy to the details that “we” the main character would be obsessing over, were we in his shoes. We see him anguishing over food and water and supplies, and yet we would feel so much more for him if only we better knew his circumstances: is he just running low? is he completely depleted? We don’t know, and we should. In fact, with little else to occupy the mind, we would know these details cold. For a film that otherwise labors so hard to place us in the mind of the protagonist these lapses seem odd, more like oversight than omission.

I also have mixed feelings about Alex Ebert’s much lauded film score. At times the film triumphs because of the soundtrack’s subtlety and restraint; at others the film is betrayed by grandiosity. It’s a tough balance to achieve even in an ordinary film, and whenever dialogue is scarce a film’s score must work that much harder t

o communicate all that is not spoken. A wobbling, bassy tone of alarm, cleverly mixed with oceanic and nautical sound effects, sends a chill down the spine as the camera cranes to reveal an oncoming storm over the horizon. At other times though, I couldn’t help but be distracted, even off-put, by musical cues that spoil moments of great suspense and intrigue, and undoes what the film otherwise achieves so gracefully through mesmerizing camera work, acting and editing.

In many ways the film’s greatest triumph is that it was made at all. The story goes that in 2011, at the Sundance Film Festival premiere of his directorial debut Margin Call, director J.C. Chandor met Robert Redford. The two began to discuss what would be Chandor’s sophomore effort, a film inspired by his ferry rides from Rhode Island to New York. It must have been a tough sell, with the lack of dialogue the shooting script is reported to be only thirty-one pages long and the budget a paltry $8.5 million (most of which I’m sure came after Redford confirmed his involvement in 2012). Like Quentin Tarantino’s Reservoir Dogs, it is the sort of film that would never have been made without the involvement of an established actor, one with the sort of track record for investment in independent film that Redford has defined himself by for decades. Movies like All Is Lost carry the torch of an increasingly rare type of filmmaking, one that bravely trusts its audience to assemble the meanings for themselves, and that avoids resorting to pomp or trickery, always compensating with the resourcefulness born out of low-budget necessity. In doing so, it soars far higher than most big budget films ever could. In this way the story is a metaphor for the movie itself, a lonely soul against a vast ocean of predators and obstacles, so outmatched as to be celebrated for the shear audacity of its existence.

4 thoughts on “Film Review: All Is Lost”