In my youth I remember a time when the term chick flick was synonymous with romantic comedy. I have been a fierce opponent of the chick flick moniker for quite some time, finding it dismissive and a skosh offensive to the female gender (as well as maybe baby chickens), but in some areas it remains. The romantic comedy genre as a whole is littered with pedantic drivel, but honestly what genre isn’t? Amongst the dregs are gems that establish the genre at its best and solidify the need for films like this. I urge all to push aside the use of the term chick flick and come to accept the romantic comedy genre (and please let’s not call it rom-com) for the complexity and wealth it is capable of bearing. That Awkward Moment certainly displays the potential masculinity of this genre, while not being afraid to exploit the existing tropes for their fullest affect. 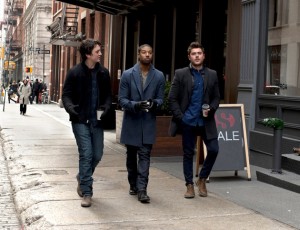 After Mikey’s (Michael B. Jordan) wife informs him of her ongoing affair and desire to end their marriage, he is sad and lost. Luckily, he has friends Jason (Zac Efron) and Daniel (Miles Teller) to fall on for support. Unfortunately, Jason and Daniel aren’t the best guys to go to for relationship advice. Happily in their twenties and single, Jason and Daniel spend a great deal of their time at bars picking up girls, carefully cultivating their respective “rosters”. So, it is with little hesitation that they propose to Mikey that they all remain single and enjoy the life of leisure together. Of course, life has its way of creeping in and the guys find that relationships can be a bit more complicated when they actually allow emotions to become involved.

On the surface, That Awkward Moment is nothing more than another in a long line of films featuring male leads that are misogynistic, emotionally retarded, and more or less disconnected from reality. Do these type of guys exist? Assuredly they do, but goddamn, not to the extent to which they are portrayed in media. The 20-something single male of media is nothing more than a hard-on with legs. He is not interested in love, understanding or really feeling anything. This is most obvious in the many dalliances with those of the female persuasion, but much of the time they have staggeringly difficult times just connecting with their compatriots. The time they spend with the members of their horde consist of braggadocios recounting of sexual conquests that beguile reality, mixed in with cheap beer and video games. When That Awkward Moment is playing in this field of inescapable assholes, it really isn’t all that special. The characters come off as mean-spirited and childish. However, when the film gets away from these ugly stereotypes and begins to explore the flawed nature of itself, it actually begins to produce something worthwhile and damn entertaining.

Mikey is the deepest of the three, and often acts as the audience surrogate. Instead of excitedly joining in the guys’ exploits or being little more than a pit of sadness, he readily calls the others out on their stupidity. He doesn’t shy away from letting them know that their professed deep insight into singledom is small-minded, empty and that for most of the time, they are simply assholes. For a great swath of the film, he goes ignored, that honest friend that is laughed off, but at a certain point Jason and Daniel begin to realize that their depressed friend isn’t wrong. This way of life isn’t as fantastic as they see it and it leads to an eventual lonely sorrowful vat of nothing. By first embracing this playboy image, writer director Tom Gormican reveals its own hollow nature. It would be simple, and easily dismissed, had he relied on only the strength of romantic love. Instead he allows the film to be about these three boys, showing that it is good and necessary to allow emotional connection into your life, even if that means just having honest conversations with your closest friend about how things make you feel.

While the writing is strong, with decent character development and a willingness to depict women that are not defined by their male counterparts, it is the charm and chemistry of the actors that makes the film shine. Zac Efron is easily the most recognizable of the cast, and often he is posited as the film’s focus, but it is supporting player Miles Teller that commands much of the film. His storyline is the strongest and most mature, despite the fact that his bragging ways and juvenile mentality would imply otherwise. He is given the best lines, and delivers them with the confidence of an experienced comedic actor. The character could easily have devolved into an ugly simpleton but Teller invokes just enough vulnerability to make him accessible, and dare I say, likable. At times, however, the film seemed better catered to a television series rather than film. By focusing on a trio of friends, each with a distinct story, it often feels rushed as it tries to flesh them all out. This results in the underutilization of Michael B. Jordan. His storyline is deeply complex, and bereft with emotional possibility, but he mostly fades into the background, his story never being allowed enough space to breathe and grow.

In every way, That Awkward Moment should feel familiar and unexceptional, a drop in an ever expanding sea of romantic comedies. It has plenty of clichés and an ending that is far from unexpected, however, along the way it develops such a strength of voice as to render all of its weaknesses excusable. The script is often quite funny, and the cast is superb, with Miles Teller in particular delivering a performance that is more than a batch of wit, infusing his character with emotional complexity that simmers rather than boils. It is in the way the film fully embraces the tropes of its genre that it begins to set itself apart. Freshman writer-director Tom Gormican lends the film a self-awareness that ultimately elevates it. Rather than simply indulging in stereotypes, he chooses to actually say something about these images that have been molded over time, revealing and exploiting the very faults that define them. That Awkward Moment is a genuinely funny film with a charming cast that manages to squeeze honest emotionality in-between the laughs. The film occasionally stumbles, and could have benefited from the removal of some dangling and underdeveloped plot threads. However, in its acceptance of the expectations of its own genre, and the confidence and strength of its vision, it makes a stale concept feel fresh, proving that the genre has plenty to offer when done right.