300: Rise of an Empire opens in theaters everywhere today, March 7. Check your local listings for showtimes.

Sequels have become standard fare in the multiplex. With franchises gaining establishment before their first installment even experiences its release date, to see the inevitable sequel set-up in the film’s final moments is closer to expectation than surprise. As I reflected on 300, I recalled it as a film with a finite ending, but even my recollection was skewed. In fact, the homoerotic ab-fest did include a Spartan call to arms that assuredly would lead to some massive sword-and-sandal epic sequel. It was a bare introduction to a film overflowing with the ferocity of revenge, a story of a people inspired by a felled king, a film about an angry Sparta. I don’t know where that film is, but it sure ain’t 300: Rise of an Empire. 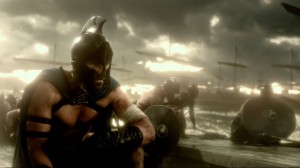 Themistocles (Sullivan Stapleton) is an Athenian war hero. His greatest victory came when he led the Athenians against the Persians, and personally slayed King Darius. The slaying of King Darius was the first in a long line of dominoes that ultimately led to the creation of the “god king” Xerxes (Rodrigo Santoro). Xerxes enlists the naval prowess and ruthlessness of Artemisia (Eva Green) to spearhead his campaign against the Greeks. Defeating the Persians will take more than the warriors of Sparta, or the politicians of Athens; it will take the whole of Greece.

Despite 300 setting up a potential sequel, was anyone truly clamoring for further exploration of this world? Men excitedly watched swaths of barely clad mounds of muscle graphically battle opponents of varying ornamental attire. The violence and unbridled action blinded many of the chest-thumping bros from realizing that they were but one fireside love scene away from a well-produced piece of gay pornography. But did any of those guys walk out hoping for deeper exploration of plot complexities? No. They wanted more dude on dude action. 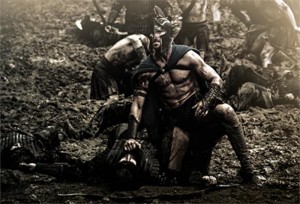 Thankfully, the film appears to be aware of the ridiculousness of its very existence. Rather than attempt to craft characters with actual development or believable anything, they just throw everything they can think of at the wall. This mentality can be seen right in the film’s own plot. Not content to be only a sequel, the story takes place before, during, and after the events contained within 300. Honestly, it’s hard to keep track of what is even considered the main storyline. We are thrown from one battle to the next. Bounding from land to sea, with blades flashing left and right, and pools of blood forming at our feet. The body count continues to rise as the action set pieces become more complex and over-the-top. Sidestepping my every instinct as a reviewer of film, this was turning into a whole lot of fun.

Often the script possesses a self-awareness that cannot expect any other reaction than laughter. The dialogue is alien and theatrical to the point of hyperbole. Blood erupts from every slice. The ocean reacts as if connected to the emotions of those riding its watery crests. As battles rage, the waves contort and thrash in every direction; but as tempers calm, the surface becomes a still mirror. 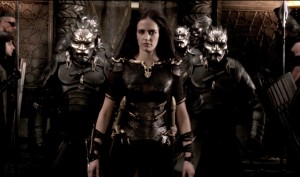 The action is endless, and each battle seeks to top the last. Leading this spirit of excess is Eva Green. Her Artemisia is a predator in every sense of the word. Green ferociously chews up every scene she appears in. Her knowing performance is a delight from start to finish, and the scenes that do not feature her are worse for it. This is an actress having so much fun with a character that you can’t help but be swept along in it. Eva Green’s fearlessness in the way she tackles every unthinkably insane action saves the film from being a forgettable sequel. Her performance is a representation of the enjoyability of this piece of unwanted cinema.

Unfortunately, in between the grandiose set-pieces the film tries to establish a genuine story. It’s like when the class clown attempts to have a moment of philosophical depth. Not only is it not believable, but none of us want to hear that from him. The scenes of leaden exposition bring the film to such a screeching halt that it is jarring. A film that employs this much slow motion, enough to make even Zack Snyder urge they cool it on the slow motion, is not a film to successfully employ thematic weight. When 300: Rise of an Empire is able to accept what it is, and revel in the confusion that is its existence, it is a piece of campy cinematic fun. However, when it loses track of itself and attempts to be a film of even minor respectability, it crumbles. This is not a bad film, but it certainly isn’t one to be taken seriously. Let us laugh with you 300: Rise of an Empire, because otherwise we will just as easily laugh at you.