As a reviewer of film, there is no greater pleasure than someone excitedly telling you that you helped them find a film that would have otherwise gone unseen. It is the clearest representation of the potential universality of film. Unfortunately, those moments are fleeting and buried amongst these little seen gems are big budget tent poles that seemingly laugh in the face of critics. Regardless, I trek to these screenings, for as a critic it is your job to see as much as you can, and not just what you find most intriguing. These box-office behemoths have their built in fan-bases, their legions of fan boys and fan girls, whose care for criticism begins and ends at Rotten Tomatoes. They want their beloved to be celebrated, but care little for reasoning. I saw Divergent this week, a middling bit of young adult fodder, but in all honesty, the fans could care less. 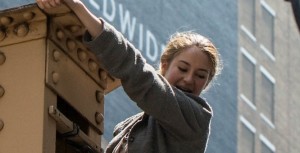 The world has been ravaged by war, yet Chicago remains standing. Hidden behind a massive wall, the people have found new ways to survive. All individuals are separated into factions that define their behavior and place in society. The five factions, Abnegation, Dauntless, Erudite, Candor, and Amity, work cohesively to maintain peace. As each child comes of age, they are tested to determine in which faction they belong. The decision is ultimately their own, the test only a helping hand, but once the choice is made it cannot be changed. Beatrice (Shailene Woodley), coming from a family of Abnegation, is unsure of where she fits, and hopes the test will provide her guidance. Unfortunately, her test is inconclusive, a Divergent, and she is hurried out of the facility. Meanwhile, the long accepted peace may be closer to crumbling than the divided society would like to think. 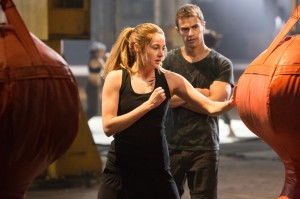 Divergent is another in a long line of post-apocalyptic teen drama-actioners based on a series of young adult novels. The recent trend, which began with The Hunger Games, shows no sign of stopping, with trailers for The Maze Runner and The Giver also coming out this week, not to mention the earlier disappointment of Ender’s Game. It is a genre that is becoming confusedly saturated in a short span of time; something that I cannot imagine being a prediction five years ago. Assuredly all of these films will make bank, but at this point are they even saying anything new? If Divergent is any indication, the answer is a resounding no.

The problem with Divergent is largely on its pacing. Sure, the plot is a bit rudimentary and largely predictable, but it is at least somewhat engaging. I am not so ignorant as to argue that the factional divide is so boneheaded as to never be the logical choice of society, as serfdom, and the caste system would quickly reveal that to be incorrect. I do however call to issue the insistence that in this wrecked society, this is the ultimate vehicle of peace. They say hindsight is 20/20, and you would have to be pretty blind to history to believe that this system, which has seen multiple failures, would be able to succeed this final time. Sorry, sorry. Here I am falling down the hole that I swore I wouldn’t step into. Every post-apocalyptic story has at least a germ of inconceivability, and we could just as easily shift this argument into the stupidity of the ruling Capitol, or enlisting children to fight wars. What was my point? That’s right, the horrendous pacing. 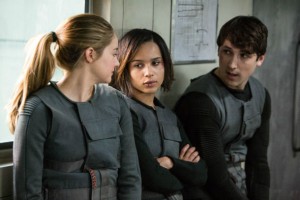 The film will quickly draw comparison to The Hunger Games, but outside of the central strong female character, the two are actually quite different. Divergent is much more reminiscent of Ender’s Game. Like Ender’s Game, Divergent spends swaths of time on training. Nearly the entire film involves Tris undergoing repetitive and rigorous training. Within these gym-focused sessions, the script attempts to shoehorn in character development and world building in the form of heavy-handed exposition. Outside of Tris, the other characters offer little relevancy. They are here simply to check a box, and fill in some explanation as to the way society is now. The training is spoken of in stages, but it seems as if it will never end. In fact, it looks like the writers were unsure of how to logically move on, as the transition into the film’s third act is abruptly jarring. All of the sudden, the training and all of its dramas are resolved and there is some greater nefarious act introduced. We have been presented with little reason to care for these characters so this forced shift is just plain bothersome. 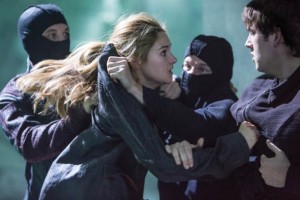 The poorly written screenplay is thankfully in the hands of an adept cast. Woodley carries the film adequately and Miles Teller is able to breathe a bit of life into his simplistic bully. Kate Winslet appears to be having a ball as the smartly devious villain, but in all honesty, she can only do so much with what she’s been presented. Like its cast, much of the film is very nice to look at. The effects blend nicely, and the larger epic shots are nearly awe-inspiring. Maybe that’s why watching this film is frustrating. Divergent has so much potential, with its talented cast and above average visuals; however it all is squandered just enough to be unremarkable. Divergent never dips into terrible territory, but it lacks the confidence to become something actually good. As I sat in the theater, a man in front of me jokingly said, “well I’m glad there are so many kids here, so I can know if I’m supposed to enjoy this.” Based on the limited reaction of the legions of pre-teens surrounding me, when asked about Divergent, a blasé shrug seems most appropriate.