It’s always interesting when Documentary filmmakers shift to narrative film. The first example that comes to mind is Pontecorvo, known for his film “The Battle of Algiers.” There’s always something unique about the decisions they make as filmmakers. With “Algiers,” Pontecorvo used non-actors, individuals that were around or part of the uprising. With “Beneath the Harvest Sky,” directors Aron Gaudet and Gita Pullapilly went up to the northernmost part of Maine, and built a script around real-life stories they heard from people.

“Beneath the Harvest Sky” opens with two vastly different close friends, Casper (Emory Cohen) and Dominic (Callan McAuliffe). The two have been saving up money to move from their hometown of Van Buren, Maine, to Boston, where they’ll be able to catch Red Sox games whenever they want. As school breaks for the potato harvest, Casper get’s suspended after an outburst with a teacher, and is asked to spend the time thinking about whether he wants to come back. 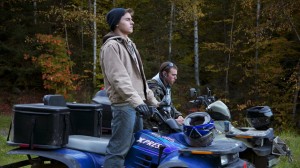 Casper’s father, Clayton (Aidan Gillen), is involved in the business of smuggling prescription pills over the border, distributing it in the region. To make some money, and perhaps build a better relationship with his father, Casper is breaking into homes and stealing bottles of pills.

As Clayton’s working relationship with his brother becomes more complicated, he starts to involve Casper in more doings, which in turn complicates Casper and Dominic’s friendship.

The film’s score by Dustin Hamman is haunting, and does an amazing job of highlighting some of the tense emotions throughout. “Beneath the Harvest Sky” is Hamman’s first film score, but you wouldn’t be able to tell.

Cohen and McAuliffe both do an excellent job in their roles. Expertly cast, they seem like real teenagers with real

problems, as opposed to the teenage caricatures that often make up films today. Gaudet and Pullapilly mentioned during their Q&A at IFFBoston that they were setting out to make a more realistic film about teenagers, more “The Outsiders,” and less “Twilight.”

Consistently throughout the film, the camera feels a bit out of the way of the performers. Perhaps this was the documentary influence, often times we are behind or to the side of them, or zoomed in from afar. I felt like this distance caused a feeling of detachment from the characters. That said, there was some really beautiful imagery in the film, from the two friends throwing rocks at a large water tower, to the young couple walking along train tracks. The film felt like it captured the essence of their location perfectly.

“Beneath the Harvest Sky’s” story doesn’t move like a traditional narrative. There are multiple plots going on for each character, making the film feel like a slice of life, rather than a traditional story. Though, approaching a story this way tends to create issues with pacing. There were some storylines that didn’t come together at a more logical point for better balance. However, the film does come together in the end, but, that pay off could have been a bit stronger by moving some key scenes around. In the end, life doesn’t operate that way, which is what the filmmakers may have been going for.

I’m fascinated by this directing pair, and eager to see what their next pursuit is.