Soul searching films are a staple for independent film because film, like other art forms, is a reflection of humanity. “Homemakers,” is a film about a girl returning to her late-Grandfather’s abandoned Pittsburgh home, and seeking to restore it.

Irene (Rachel McKeon), is an indie rocker from Austin, and arrives in Pittsburgh to claim her inheritance. Upon her arrival, she reconnects with her long lost cousin, Cam (Jack Culbertson), who she enlists in her project. When together, the pair drink, and so begins their destruction/construction project on the aging home.

Irene starts to discover there is a piece of her that perhaps likes the idea of settling down. She selects a room for herself in the house, and she keeps pushing Cam to help her with her vision of the home. Complete with a “moon room,” and a backyard full of bathtubs, there is beauty found in the mess of a house. Things become complicated as Irene runs out of money, and we learn more about the issues in her familial relationships, as well as Cam’s. 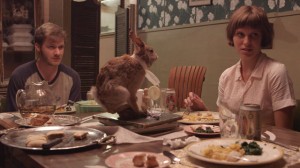 Director Colin Healey and his Production Designers did an amazing job giving the house as much character as McKeon gives Irene. The parallels of a complex multileveled house with tons of “junk,” say a lot about the main protagonist. McKeon’s performance is stellar, in one moment she’s screaming and upset, and before the camera cuts away, she comes back into the room with a completely different persona. The score of the film also stands out, having as much character as the rest of the film.

“Homemakers” is delightful, but definitely not a film for everyone. Irene’s quirks and aggression could frustrate and annoy some audiences; there are many aspects to her character that aren’t particularly likable. But what makes her so interesting is that you can see on the Character’s surface her struggle with finding a balance of doing what’s right but also not doing what might be expected of her. McKeon embodies Irene, and lights up the screen with writer/director Colin Healey’s words and vision. Look out for this small, special film as it continues to make its festival rounds.