The assimilation of an immigrant populations culture is fascinating, but it would never have occurred to me to use a signature dish as a tool to tell the story of Chinese-American’s. “The Search of General Tso,” from director Ian Cheney, asks and answers some great questions in his documentary, including, but not limited to “Who is General Tso, and did he actually like chicken?”

We start in New York City, with a collection of Chinese food menus that date back to 1916. As we flip through the menu, there is no appearance of the dish in the menus. So the film’s research moves us back even further, with the arrival of Chinese to San Francisco during the Gold Rush. 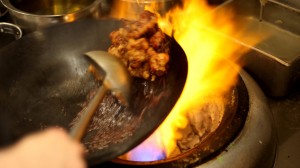 As Chinese came to the United States, like many cultures before and after them, they arrived to racism, fear, and discrimination. Jobs available were limited to them, and so began the creation of Chinese food establishments. However, the American palate was not prepared for these exotic foods. So Chef’s found themselves adapting it to more familiar American comfort foods – beginning  with  the creation of Chop Suey. In many ways, the Chinese found acceptance through these Americanized versions of their foods, and to this day, some of the first jobs immigrants from China take are in the food industry.

We spend a significant time trotting domestically, meeting the owners of many different Chinese restaurants. Even in towns where the Chinese population is low, the cuisine is still represented. At one point we arrive to Springfield, MO, where we meet the inventor of Cashew Chicken, whose original recipe has a similar texture and make up to McDonald’s Chicken McNuggets. Suspiciously, the restaurant was visited by several executives of the company, and asked about acquiring the recipe. Leaving empty handed, McNuggets were added to the menu a short while later. 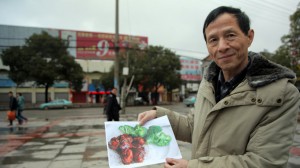 To fully understand the food, the film seeks out the story of General Tso, taking us to mainland China, and eventually to the Hunan Province. While in United States, we don’t meet a single person on the street who isn’t familiar with the dish, however, photos the crew displays to some folks on the street in China are met with shrugs. A great moment in the film is when they are presented with Fortune Cookies, which seem to be unrecognizable to film’s subjects in China.

I won’t delve too much deeper into the documentary’s narrative, the fast moving and balanced story leads to a great pay off in the end. It’s an entertaining film that never slips in it’s pacing, and provides you with so much information that you never thought you’d even find interesting. So, did General Tso invent his famous chicken? You’ll just have to see the movie to find out.