“The Case Against 8” is a powerful documentary filmed over the course of five years that tells the story of the battle over the rights for gay couples to legally marry in the state of California. It’d be easy for a film like this to get lost in a maze of legalese and court room documents, but like the case itself, it focuses at the two couples at the center of the story, and the love they have for each other.

The documentary begins with the case being built by the American Foundation of Equal Rights, and the selection of the two couples that would represent the plaintiffs in court. We follow Kris Perry and Sandra Stier, as well as Paul Katami and Jeff Zarrillo along the way, seeing the highs and lows during those five years.

Just as important are the two main lawyers, Ted Olson and David Boies, who most will know of because of their rivalry during the Bush vs Gore recount proceedings. It was interesting to see these two lawyers with very contrasting politics, come together to bring their years of expertise in this landmark case.

The love that the two couples share at times is so wonderful, and so apparent, and the joys they have as they work their way up to the supreme court is amazing to see. It tugs at the heart strings in such a powerful way, you’d be hard pressed not to get a bit weepy. 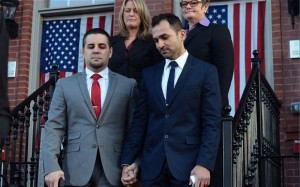 Directors Ben Cotner and Ryan White crafted a tight story, and did an excellent job of cramming in so much information without feeling like the movie misses a beat. It’s a genuinely beautiful drama, and will take its place as historical record in the battle for equal rights.