I can’t remember the last time I’ve seen a first feature from a filmmaker and been as impressed as I was with “Dear White People.” Justin Simien’s film has such a tight narrative, woven with deep social commentary and satire, and told by an amazing ensemble of characters.

“Dear White People,” tells the story of 4 black students at an Ivy League school where a riot has broken out on campus during an “African-American” themed party. The film back tracks 5 weeks before the race issues on campus boil over. 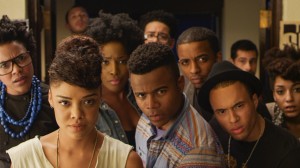 Troy (Brandon Bell), the handsome upperclassman, and son of the Dean of Students (Dennis Haysbert), is in the midst of a reelection of House leader, coming up against ex-girlfriend Sam (Tessa Thompson). Sam, active in the strong counter-culture on Campus, is a Media student, and also host of her radio show “Dear White People.” New to campus is CoCo (Teyonah Parris), who is unhappy with her placement in the “black” housing on campus. Also equally unhappy with his placement is Freshman, Lionel (Tyler James Williams), who lives in the same house as Troy (Kyle Gallner), whose the College President’s Son. 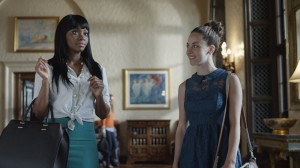 What all the characters have in common is that they all are a bit lost, struggling with their own self identity and trying to find their place. What makes it so interesting is that for some characters, this uncertainty is a bit more obvious, and some do a much better job of hiding it. For example, Troy, who always seems to do what is expected of him, will spend a longer time then usual in the shower to smoke weed, and longs to join the school’s satire magazine. Sam, who seems to be comfortable as the front woman of combating the racial tensions on campus is carrying on a secret relationship with a white student. CoCo’s search for identity is much more obvious, highlighted by her blue eye contacts, and her video blog speaking out against “Dear White People.” Lionel, who stands out as my favorite character, doesn’t feel like he belongs with either student population, but starts to work on a character piece covering the hot topic issues between the Black and White student populations in the school paper – beginning with Sam blocking non-house-members eating in their house cafeteria. 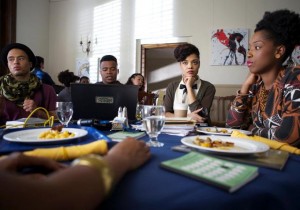 “Dear White People,” has elements of films like “Do the Right Thing,” “Network,” and “The Royal Tenembaums” – a fact that was affirmed by Simien during the Q&A that followed the screening at IFFBoston. Despite being inspired by those films, Simien finds his own style. Save for one great homage to the “Do the Right Thing” gentrification exchange. His approach is very thoughtful, and he does a great job of creating a story that is able to comment on so much, but not have it feel preachy or pandering. The film was born out of an effort to tell a story about identity in what is being labeled as a “post-racial” period in America. Audiences will leave the theatre asking themselves a lot of questions, and for that, “Dear White People,” succeeds.