Tough Bond is available on iTunes, Video-On-Demand, and in theaters in US and Canada today, May 6. Check your local listings for showtimes.

The only place to consume film used to be the theater. The sticky floors, creaky seats, and overpriced concessions are still the preferred method of consumption, but with the proliferation of the internet we are not confined to these temples of cinema. The uncomfortable seats are replaced by a cozy couch, the snacks are cheaper, and if the floor is sticky you should probably address that. Film may work best in the dark theaters with their massive screens but no matter the venue, film is able to transport us to another place. Be it fantastical or realistic, the world has shrunk, as we are able to catch glimpses of places that are so physically separate from our own. Tough Bond reveals that while the locations may be different, some thematic issues are threaded through it all.

The Kenyan landscape, like much of the world, is changing. The proliferation of large cities has led to the dissolution of many of the Kenyan tribes. What is left is a ramshackle of young children trolling the streets for anyway to make a schilling. In hopes of escaping their own stresses, the kids constantly huff a strong adhesive. Filmmakers Austin Peck and Anneliese Vandenberg not only concern themselves with the trials and tribulations of the Kenyan children but look deeper, attempting to figure out just how it got so bad. 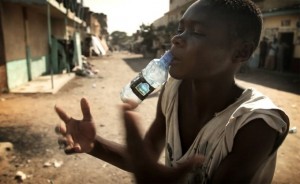 Tough Bond is the name of a strong adhesive manufactured in Kenya. It is also the name of this documentary. That is basically where the connections stop. The title is a bit of a misnomer, while many of the featured children are constantly shown with small plastic bottles dangling from their mouths, there isn’t much commentary on the actual glue. In fact, as the directors go to the manufacturer and question him about the actual versus intended uses of his product, it seems like an unnecessary detour. Its existence is interesting in premise, but it quickly becomes little more than any recreational drug use in society. The children huff with no fanfare, and in many cases it is tantamount to breathing for them. This is not a film about drug use, and in many ways it isn’t a film about poverty. No, this is a film about the importance of family.

Directors Peck and Vandenberg progress the film very thoughtfully. Beginning with the Yomo Village, as the film travels to a new location we are taken further away from the image of a traditional family. The importance of the village is left in the rearview and a sense of required independence is established. As the children become increasingly more removed from a support structure the troubles continue to compound. The poverty remains a constant, but the ability for its sufferers to cope is greatly diminished. The threat of violence increases and the environment is ever more tumultuous. The changing atmosphere gradually engulfs you, rather than feeling like a drastic shift. The government, in many ways the countries de facto parents, ignores the problem. Interviews with political leaders shows an inattention to the homeless children that borders on ignorance. No one is willing to come to the side of these lost boys. They are treated like cockroaches, a burden to be dismissed and ignored except when they step out of line. When the film finally returns to the Yomo Village, the comparison is all the more jarring. The villagers are on hard times, but they rely on one another rather than the falsity of glue. They do not yearn for this perpetual escape and as they turn to each other it feels like a happier, safer, and more complete place. 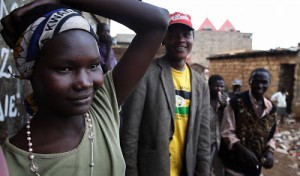 The cinematography captures grand Kenyan vistas, treating slums with as much deference as the undeveloped Yomo Village. At many times the film transcends its own medium, feeling not like a movie but rather a glimpse into another place. The directors establish a proximity and familiarity with the subjects to allow for the breaking of barriers. The children do not fear speaking with the camera, in many cases it seems to bring them alive. It is as if the camera is offering them a stage from which to tell their story, a story that their society has long since stopped caring for. The organic moments lend the film strong authenticity. The directors fade into the background and visually guide us through the story that they want to tell, expressing just as much confidence in the exquisite establishing shots as in the more intimate households, while always feeling cohesive.

Many documentaries that depict hardships are followed by a call to action. They provide their viewers with a way to step up and battle the poor conditions that they have become witness to. Tough Bond is different. It shows us a world broken, missing the core family that has shaped societies for generations. The voice of its directors remains constrained, unwilling to offer their own opinion on the matter. By simply presenting the actuality of life in Kenya, it inspires deeper introspection in the audience. The problems in Kenya are deep and complicated, and a solution cannot be offered up like a product from a vending machine. Tough Bond may be positioned as merely a documentation of drug use by Kenyan children, but in its more thorough examination of the importance of family it breaks free from the restrictions of its poverty stricken location, communicating a concept that is universal.