Neighbors opens in theaters nationwide today, May 9. Check your local listings for showtimes.

My parents were pretty strict when it came to abiding by the MPAA rating system. Many of my friends hustled off to see whatever new releases flooded the mall’s multiplex, while I sat quietly cursing that judgmental R. This limitation forced me headlong into catalog rentals and films that my parents deemed as “must watches”. The only R-rated movie I was ever allowed to see before I could purchase my own ticket was Animal House.

I remember my parents sitting me down and somewhat sternly stating, “Now this is a classic. I know we don’t let you watch R movies, but this is an exception.” My 14-year-old brain bristled with excitement; this was a movie with nudity. As I nearly vibrated with misguided anticipation for boobs, I became distracted by the comedy. Not only was the movie funny, but it was smart. It never slowed, the jokes were constant, and I was introduced to the joy of John Belushi’s physical comedy. I had been ruined. My excitement for the naked female form had been replaced by an appreciation for crafted college comedy, leaving a void that persistently sidesteps fulfillment. I paint this picture to create context. It is not without gravity that I make this statement: Neighbors is

the heir to the Animal House throne.

Married, parents of a newborn, and now homeowners, Mac (Seth Rogen) and Kelly (Rose Byrne) are really growing up. Just as they are getting settled into their humble abode, they notice some new neighbors moving in next door. Out of a U-Haul truck comes a flood of collegiate testosterone. The house next door has become the base camp for the Delta Psi Beta fraternity. Led by Teddy (Zac Efron), they are a hard partying group of bros keen on intoxication and fornication. Mac and Kelly’s life of quiet just got the volume cranked.

The struggle with college movies is that of purpose. College is a place of change and discovery. Ideally it is where you find your passions and begin to gather the tools to make them a career. However, in the movies, it is little more than an excuse to party hard. The escapist in us enjoys seeing these outlandish parties that we cannot imagine existing in the real world. But a film cannot be all party, despite what Project X would like you to believe. A disconnected world can be presented, but in order for us to buy it there needs to be a point of entry. The parade of lackluster college films trot out over-the-top set pieces and gross-out gags that may elicit laughter but ultimately feel empty. For a film to be better than merely hollow chuckles it needs to offer more than just good times, it must have purpose. With Neighbors, it is the many headed beast of growing up. 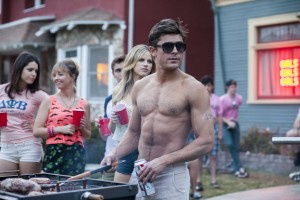 Sprinkled on a bed of jokes is a commentary on aging in our youth obsessed society. Mac and Kelly represent the likely next step to follow the jubilation of institutionalized education. Seth Rogen and Rose Byrne play the characters as flawed people, out of touch with the newest trends but so yearning for inclusion. They do not dislike fun, but simply have evolved the ideal. Life has intruded, and sleep remains the victor over nights of debauchery. Their new neighbors are a bawdy representation of a life lost, and their own inherent adulthood. They struggle to address it, and at times simply fold themselves into it. On the other side are the brothers of the fraternity. On the surface, they fill the basic tropes, with Efron and Dave Franco enthusiastically leading the way. What sets the film apart is its insistence on giving the brothers shading. They are pillars of bombast, but still people. It is the first film in recent memory to actively address the inherent sadness of the educationally devoid but socially excelled. Efron’s Teddy is a character lost, and life intrudes to reveal a depression that lurks beneath a sheen of bravado.

Nevertheless, this isn’t some introspective art film. This is a comedy, and Neighbors never loses sight of its overriding mission. Throughout, the film exercises terrific comedic timing. Occasionally it goes a bit saccharine or dips into the slightly melodramatic, but before it loses any noticeable steam it counters with a well-placed joke or gag. Writers Andrew J. Cohen and Brendan O’Brien have written an electric script that flirts with the predictable, while never succumbing completely. The cast is positively overflowing with comedic heavyweights, and with a presence like Rogen, it is hard not to think that many of the funniest moments came from improvised insight. Shining especially brightly is Efron, who continues to prove that he is so much better than the High School Musical label he has been branded with. He shows up to play, with energy and skill that allows his character to be both despicable and likeable. His chemistry with Rogen, and to a greater degree, Franco, propels the film forward.

Likely without coincidence, Neighbors’ fraternity shares its leading Greek letter with that of Animal House. The film’s inspiration is clear, and it does all that it can to honor its legendary brethren. Unlike the rash of simpletons that have largely made up the college comedy output, Neighbors is nearly as smart as it is funny. The entire cast delivers performances specifically catered to generate waves of laughter, with Efron a particular standout. Nicholar Stoller has struggled to direct a film as good as his debut, Forgetting Sarah Marshall, but with Neighbors he finally delivers. He embraces the party atmosphere, thrusting the viewers into music videos of days gone by, with palpable intensity. The film is elevated by a script that isn’t content with simply being funny, providing an appropriate commentary on growing up that reads as authentic and never overbearing. Neighbors is not merely an Animal House wannabe. It is a smartly written, well-delivered comedy that has just as much brain as comedic chops. You will laugh. Hard.