I always look forward to Christopher Nolan’s films; his big-budget spectacles are thought-provoking, result in thorough discussion and analysis by viewers, such as the end of “Inception” and the tightly-woven web he created in “The Prestige.” From a review perspective, his films are also difficult to discuss without spoilers, but I’m always up for a challenge, so here is the spoiler-free review of “Interstellar.”

In the midst of Matthew McConaughey’s renaissance, came the reveal that he’d be starring in Nolan’s first film following his conclusion of the “Dark Knight” trilogy. There is a welcome shadow around the marketing and promotions for Nolan’s films to help preserve the mystery and unexpected plot points that are so key to his style, but every trailer leading up to the release of “Interstellar” painted an epic space adventure: how did it measure up to the hype around it? 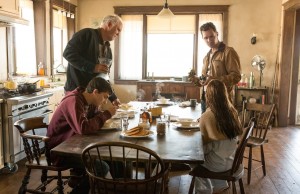 In the near future (the exact year specifically left out), the Earth is dying. Crops can’t survive, and dust storms roll through the landscape. Cooper (McConaughey), formerly a NASA test pilot, now runs a farm, growing corn and managing his family. His son Tom is content with his future as a farmer, but Cooper’s 10-year-old daughter, Murphy, is clearly meant for something more, expelled from school for arguing with her teachers about space science.

Through a series of mysterious events, Cooper is folded into a space expedition meant to find a new home for the people of Earth, and he is forced to leave his family behind.

One of the weaknesses of “Inception” was the reliance on Ellen Paige’s character to explain the “science” behind dream sharing. At 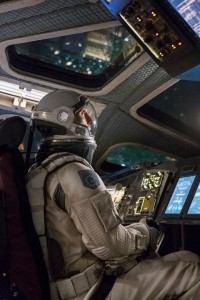 times, her dialogue became stiff, and it was obvious to the audience that, oh, this is where they explain the mechanics of the plot. Clearly, Nolan has learned his lesson – the task of explaining the complicated science behind traveling through space and time is shared among the various scientists, and feels much more natural. There’s a one scene where there is a very basic description of how a wormhole works – it doesn’t feel like it is pandering to audience members who may be familiar with the theory, and it doesn’t leave folks who aren’t as familiar behind.

“Interstellar” is photographed beautifully, with hundreds of amazing shots giving us a front seat view on an adventure that spans galaxies. The cherry on top is the haunting, chilling, and at times booming organ music in Hans Zimmer’s score. It only adds to the film’s scale, and certainly will draw comparisons to Kubrick’s “2001.” One note regarding the film’s sound mix is that there were a few 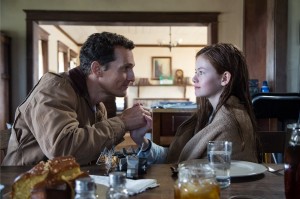 moments when the music drowned out some dialogue – however, the moments when it did felt deliberate, and added to the drama.

“Interstellar” is a deep film that may require additional viewings. There were some commonalities between this film and Zemecki’s film “Contact,” which makes sense, given the involvement of theoretical physicist Kip Thorne in both projects. However, I think “Interstellar” did a much better job implementing the scientific theory into its narrative, as well as exploring the theme of human relationships and emotions. In all of Nolan’s films, I don’t think he’s ever captured emotions as well as he does here.