“Get Hard” opens with a very conscious montage of the have and the have-nots, the working class versus the 1%. The opening was an interesting decision by the filmmakers – 30 seconds after this montage, the hope this film might make use smart comedy to make a political statement goes right out the door.

“Get Hard” pairs Kevin Hart with the always entertaining Will Ferrell in a predictable fish-out-of-water story about a millionaire heading to jail after being found guilty of Bernie Madoff-style insider trading.

Facing 10 years in San Quentin, James (Ferrell), makes assumptions about Darnell (Hart), the hard-working owner of a car wash, and enlists his help to prepare for prison. Though Darnell has no actual prison experience, he plays along and takes James’ offer so he can afford a new house in a better neighborhood for his family.

The film puts the pair in increasingly comedic situations, the best of which are played out in the film’s advertising. There’s 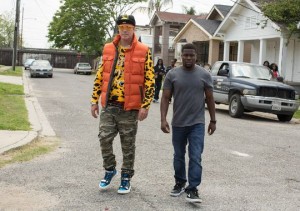 nothing surprising, save for a few excessively R-rated moments left out of the previews.

While Ferrell and Hart have good chemistry, there is nothing that makes “Get Hard” a memorable comedy. It is 100% a paint-by-numbers story – straight down to the plot twist. Something exciting or redeeming in the original script may have been lost as the film made its way through the studio system, but that may be cutting it too much slack.