In taking a look at what’s coming up at each years festival, I always like to pick out a few films to focus in on before the start of the fest. Of course, there are no bad films at IFFBoston, but, take a look below – and share what you’re looking forward to in the comments!

Jason Schwartzman portrays Larry, an inebriated sad sack who rides a tide of booze onto the shores of an undiscriminating Quick-Lube. The only bright spot is probably his boss, Lupe (Eleanore Pienta). Will Larry keep it together long enough to win the girl, provide for his French bulldog (Schwartzman’s real-life dog Arrow), laze about with his friend Major (TV on the Radio’s Tunde Adebimpe), and do his cantankerous grandmother (Olympia Dukakis) proud? Check out the trailer below!

Anyone whose followed this blog/IFFBoston for years knows when there is a Bobcat Goldthwait movie on the schedule, you don’t miss it! “Call Me Lucky” is Bobcat Goldthwait’s portrait of comedian, activist and firebrand Barry Crimmins. 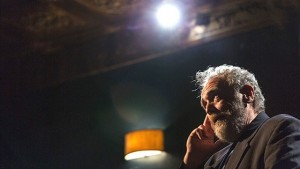 Buy Tickets to Call me Lucky

“Low Rock” staple Morphine hit the scene with their innovative sound in the 1990s, the trio went from local Boston clubs to major labels and wide critical acclaim until their tragic demise in 1999. In this new documentary from director Mark Shuman, the story is told through the group’s surviving members, intercut with rare live performances, and Saxaphonist Dana Colley’s tour journals.

After false reports of his demise put him and his work on the map, an artist (Jack Huston, Boardwalk Empire) decides to continue the charade by posing as his own brother. Soon, a reporter (Brit Marling) enters his life and has a profound effect on him.

Love Between the Covers

This documentary takes a look at powerful community of women who read and write romance novels. Romance fiction is a multi-billion dollar business, the trailer shows their amazing community, and the film gives us an inside look into “one of the few places where women are always center stage, where female characters always win, where justice prevails in every book, and where the broad spectrum of desires of women from all backgrounds are not feared, but explored unapologetically.”

Buy Tickets for Love Between the Covers

Some of the biggest hidden gems can be found in IFFBoston’s shorts packages. This one is no exception. Directed by Luke Poling and Adam Roffman, the documentary premiered at SXSW and tells the story of the self-proclaimed world’s greatest spearhunter. Take a look at the trailer below:

From director Shannon Sun-Higginson, “GTFO” is a documentary that Investigates the prevalent misogyny in video game culture and questions the future of this 20 billion dollar industry.