James Ponsoldt is a talented filmmaker. With “The Spectacular Now,” Ponsoldt crafted a film with characters that were so well written, and a story about people that felt completely real – I couldn’t wait to see what came next. “The End of the Tour,” does it again.

David Lipsky (Jesse Eisenberg), working for Rolling Stone at the time, is sent to interview David Foster Wallace (Jason Segel), whose ending the tour for his latest book, “Infinite Jest.”

Lipsky arrives – clearly challenged and overwhelmed by the assignment, and looks to find his groove with the complex personality of David Foster Wallace. Wallace is fully aware of how what he says can be taken, stretched, and molded to paint whatever picture Lipsky wants. To get the honest and raw answers he wants, Lipsky seeks to earn Wallace’s respect and trust. 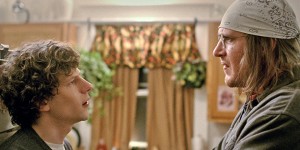 Lipsky finds himself captivated by Wallace’s personality, but also, envious – he finds himself navigating the fine line of reporter as well as friend, which causes much of the up and down nature of their relationship.

The film is filled with so much great dialogue, but the conversation is so engaging your interest never wavers. One of the strongest moments in the film is a lengthy passive aggressive period of silence between our two main characters. For a film so dialogue heavy, the silence stands out as strong and extremely expressive at a key turning moment in their relationship.

Jason Segel completely dissappears into the role of David Foster Wallace. Segel might not be the first person you’d think of to play Wallace, but, he was perfect. It never once felt like he was doing an impression, or even that he was Jason Segel pretending to be David Foster Wallace – Segel faded away into the background, and fully embodied this role.

Ponsoldt’s storytelling strength is building an arc in his films that feel very true to life. Granted, “The End of the Tour,” was adapted from true events – but even still, it would have been easy for a film like this to be completely basic. With his expert casting, Segel and Eisgenberg found this amazing groove, and truly conveyed the relationship between Wallace and Lipsky. Ponsoldt is able to make the audience feel like they had a front row seat to what he sees as a truly defining moment in his life.