“Stray Dog,” from director Debra Granik (best known for her 2010 work Winter’s Bone), is a deeply personal portrait of Ron ‘Stray Dog’ Hall, a biker and a Vietnam Vet.

Owner and operator of At Ease RV Park in Southern Missouri, Ron lives with his wife Alicia, a Mexican immigrant, and four small dogs. Ron navigates the audience through his life in middle America – dealing with PTSD from the war, the economic survival of his children, grandchildren, and friends.

Each year Ron joins thousands of bikers on their cross-country ride to the Vietnam Memorial in Washington D.C. to remember those who had fallen. On the way, we see how Ron helps others to deal with the same demons he still has not defeated in his own life.

In a great moment with his Psychiatrist, Ron says that he doesn’t want the forgiveness of the dead, he knows they’d want him to forgive himself, but he just can’t. 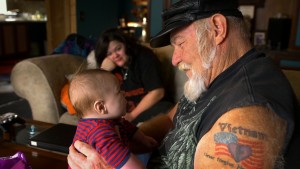 The film comes to a close as Alicia’s 19 year old twin sons arrive to the United States – the pair arrive with higher expectations of opportunity, and its clear that their vision was much different then where they’ve arrived to.

Unlike most documentaries, nothing here feels like a formal camera and subject. Most of the narrative is told as the characters move through their daily lives. I’ve never seen a film paint such a thorough picture of the heartland. Ron and his family gave the filmmakers complete access to their life, which leads to the completely raw, honest, and nonjudgemental final film.