It has been over a week since I watched Finders Keepers and I still haven’t found a way to describe the movie that doesn’t make it sound extremely strange and just a bit unfair. Just like the media storm that the story originally generated, the tale at the center of Finders Keepers is just an odd one. Man buys smoker. Man finds foot in smoker. Man wants to keep foot for personal gain. It’s weird. It’s kind of ugly. Stranger than the story itself is that this goofy little yarn is perhaps the least interesting part of the film. 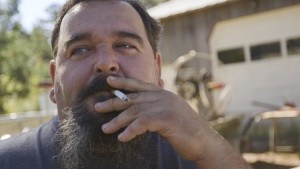 The news coverage of Shannon Whisnant’s discovery and the “custody” battle with John Wood that followed pretty much got all of that bit of the story. On the surface, that’s all it was: one weird guy selfishly clinging to another weird guy’s amputated foot. And in all honesty, the news coverage, much of which is shown in Finders Keepers, stretched that rubber band just about as far as it could go. It’s the type of story made for the internet age, where we click on one catchy headline before being distracted by one just a bit catchier. Assuredly, directors Bryan Carberry and J. Clay Tweel are well aware of the whale of headline they have here, but thankfully they don’t spend too much time reveling in the find. 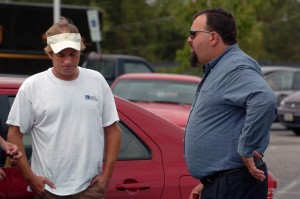 Like so many documentaries before them, the film isn’t really the story, it’s the characters, it’s the people, and Finders Keepers comes with characters to spare. The central pair, Whisnant and Wood, come bearing their eccentricities, Whisnant of the goofier variety and Wood the more depressing. This isn’t a pair that somehow belongs together or come with stories of shocking parallels. No, these are two extremely different men with starkly different values. That in itself proves to be a little bit of a struggle for the filmmakers as they attempt to balance the human truths with the bald-faced and misguided quest for celebrity.

Wood’s quest for acceptance, dalliances with drugs, and crippling battle with addiction make him the one that the audience cares about. This is the film at it’s best, using the foot to pry open this basement of hurt feelings and self doubt. For Wood this isn’t even about getting his foot back, but reconnecting with a father and a family that he has pushed away. Meanwhile, we are distracted by the hubris of Whisnant. Many have decried the millennial generation as celebrity obsessives expecting the world to hand them everything. While I call issue with this description of a generation, damn is it a great way to describe Whisnant. Does the man have any real skills? Nope. Does he love to hear himself talk? You bet your ass.

This line of good and evil is drawn in between the two, with Wood the hoped champion and Whisnant the backwoods villain. This dichotomous execution is reminiscent of another, and far superior, documentary: The King of Kong: A Fistful of Quarters. In fact, a little digging reveals the two share more than expected, with co-director J. Clay Tweel acting as associate producer on King of Kong, and that film’s director, Seth Gordon, acting as a producer this time. Finders Keepers is going for that same underdog vibe that so engaged audiences before, however the people are different, and neither is nearly as interesting. Don’t get me wrong, there are moments within Finders Keepers that will have you glued to the screen, but they come in bursts and make the film feel lumpy and poorly paced.

Maybe I’m being a little unfair to Finders Keepers. The film does more with its premise than could have possibly been expected, but it is exactly that accomplishment that makes it something of a disappointment. For Bryan Carberry, this is his first feature and certainly it isn’t a weak entry. But for J. Clay Tweel, coming on the back of his far superior Make Believe, this seems like something of a step back.

Often it just feels like Finders Keepers doesn’t know what kind of movie it really wants to be. Does it want to be this tale of competition? Is it a strange comedy in a distinctly southern setting? Or is it a story of heartbreak and family? It’s all of these things and none of them completely. In doses, Finders Keepers is an entertaining and weird sojourn into a land with emotional back roads and funny asides. But as a whole, it’s lopsided, confused, and a bit bloated.