Victoria is currently out in limited release.

I remember last year when Birdman premiered at the Venice Film Festival. No, I wasn’t there (I’m not nearly that successful or fancy), but thanks to this handy thing known as the internet, the Oscar buzz pretty much started instantly. Praise for Keaton, praise for Norton, praise for Stone, hell, even a little praise for Galifianakis. Then came the love for the behind the scenes people with Alejandro González Iñárritu getting all sorts of love, followed by Emmanuel Lubezki gorgeous cinematography. And honestly, that was the order it came out in. It was months before I remember hearing a damn thing about its “one shot” nature. People were throwing love at the film for its artistry and its technical achievement was a delightful little cherry on top of that sundae. So was I concerned when I saw Victoria’s marketing materials touting the crap out of its one take structure? Oh, you bet your ass I was.

Here’s the thing. Victoria, in its construction, is not a bad film; it’s a perfectly mediocre one. It’s the type of film that only film lovers really hear about, and only a small group of those actually care about. Victoria was never a film for mass audiences, it was one to dip in and out of festivals before landing at your local art house cinema and eventually drifting from memory entirely. But co-writer/director Sebastian Schipper just couldn’t stand for that. I get it, you want your film to be seen, for your vision to be shared, for people to experience your art. So latching onto a unique element seems like a surefire way to get more eyes on your film. However, simply doing something new and different doesn’t immediately make your film better. Birdman was praised because it was an intriguing and probing film into the human psyche. People enjoyed The Blair Witch Project not because of its found footage style, but because it was a troubling and tense little horror film. With Victoria, when the unique elements become the film, it devolves into gimmick. 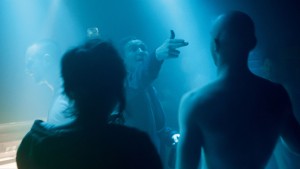 It’s a bit disappointing, because there are moments that hint at a much better film, one that with time and different stylistic approaches could have been great on its own. Many will likely find themselves attracted to the film’s second half, when the pace picks up slightly and all of the bad stuff begins to happen. But, in the film’s beginning, its build, it possesses so much more of note. Like a drunker, hornier, and less profound Before Sunrise, the “courtship” between Sonne and Victoria rides this interesting line between creepy and sweet that seems glaringly appropriate for a couple that meets at four in the morning accompanied by the rhythmic thump of house music. Laia Costa has this innocence and vulnerability that has you worried for her like a little sister, but this slightly nefarious undercurrent implying that she’ll be just fine on her own. It is juxtaposed nicely with Frederick Lau’s Sonne, who is positioned to be the more forward one.

The two banter back and forth, surrounded by the ribbing of Sonne’s friends. It’s romance in the age of 2015, where the world is smaller and Tinder has made the hookup much more accepted. We don’t expect Victoria to fall for Sonne, for some grand love story between the two, but the flirtation builds enough with Sonne gradually ingratiating himself to us, that we are kind of onboard. It’s not love, it’s lust, and there really isn’t anything wrong with that. Unfortunately, Schipper isn’t content with the honesty of it all, apparently growing tired of his own film as he wrote it, so he throws in a hastily cobbled together bank heist, and the film is markedly worse for it.

The back half of the film is something entirely different. Ugly, dishonest, inauthentic, and poorly executed. The characters betray themselves, enslaved to the contrivances of plot machinations. It’s like watching a beautiful and, by all appearances, scrumptious cake slowly be dropped on the floor. It tumbles towards the tile with you desperately reaching for just a taste, all the while knowing full well that you’ll never know how good it could have been. The tension that should so easily accompany the villainous aspects of the film’s second half is criminally absent. Not even the one take nature lends enough urgency to make us care about how it will all end up. These are not the people we started with, they are not even fully realized characters anymore, they are pawns in Schipper’s bungled game of chess, moved around without purpose or care.

If anything, Victoria exists as a warning to filmmakers. If you do not take the time and effort to ensure that the story is well built or that your characters are fully developed with at least notes of authenticity, not even the most difficult of technical achievements can make your film a great one. Yes, the fact that Victoria was completed as one take is something truly impressive, at least logistically. However, in a film so unaware of itself it ends up not even mattering. Victoria is tonally imbalanced, lacks confidence in its characters, and ultimately betrays its very sense of self all because it relied on a gimmick to raise it up. The gimmick never wins.