King Kong is one of the most iconic figures in cinema history, entertaining generations since 1933. Legendary Pictures has brought the larger-than-life creature back to the big screen as part of their “MonsterVerse,” a continuation of what started with the 2014 reboot of GODZILLA. Thankfully, director Jordan Vogt-Roberts’ KONG: SKULL ISLAND avoids the pitfalls of the 2014 film by weaving a story with interesting characters, and also avoids becoming a mess like Peter Jackson’s 2005 KING KONG film. 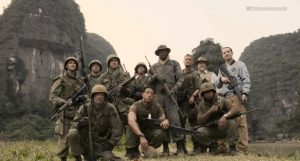 The film’s prologue takes place in 1944, in the midst of World War II: two figter pilots crash onto an island in the Pacific, and commence in hand-to-hand combat. Their fight is cut short as Kong rises into frame, climbing the cliffside the pair are fighting on. We jump ahead to 1973, the United States now at the end of the Vietnam War, and Bill Randa (John Goodman) is hounding a US Senator for permission to head to an uncharted island newly photographed via satellite reconnaissance. Randa’s timetable is sped up since he wants to piggyback on the available military assets in the area.

Lt. Col. Packard (Samuel L. Jackson), frustrated with the US decision to leave the war in Vietnam, is happy for the opportunity to support this last-minute mission. Despite access to a military squadron, Randa also recruits decommissioned British S.A.S. Captain James Conrad (Tom Hiddleston) as a tracker. Also along for the ride combat photographer Mason Weaver (Brie Larson), who immediately butts heads with Packard when he remarks that her camera can be more powerful than their guns.

Shoving off, the group arrives to Skull Island, and the film takes off – no long gestating mystery before seeing the main protagonist, this is all Kong, (almost) all the time. The film moves swiftly from set-piece to set-piece, spectacular explosions and slow-motion destruction, hardly taking a breath. All highlighted by the spectacular 70s soundtrack – all the Vietnam-era “war film” musical tropes are present here.

John C. Reilly nearly steals the show as the stranded WWII pilot, assisting in giving our adventurers the much needed insight into the real dangers on this island of mystery. 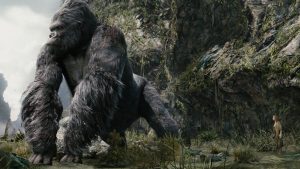 At a solid 118 minutes, the film is lean – despite the speedy storytelling you feel invested in the characters, and unlike the GODZILLA reboot, your investment in characters early on doesn’t disappoint. It’s great to see Vogt-Roberts going from his indie-budget debut THE KING OF SUMMER, to succeeding on this big budget blockbuster. KONG: SKULL ISLAND is a clear course correct to GODZILLA 2014’s misstep, creating happy anticipation for where this universe takes us next.