The world of Guillermo Del Toro’s upcoming PACIFIC RIM is fascinating. A frightening future where Giant Monsters come out of the center of the earth, and Earth’s only hope are these giant human controller robots to fight them. Everything I’ve seen definitely has me interested in this film.

Happy Monday readers! This great recut of the 1974 trailer using the style and music of Luhrmann’s adaptation dropped over the weekend. Expertly done. Enjoy!

One of the best parts of every years Independent Film Festival of Boston are its amazing shorts packages. This year, the shorts are split into 7 different “packages,” all offering a different selection of films. Below, I’ll be highlighting and featuring trailers from a few.

“Lonely Boy” tells the story of a schizophrenic bachelor. Stuck in a directionless rut of cold isolation, Franky lives in a bare apartment and works a dead-end job. As he attempts to enter the harsh world of dating.

In this feature-length documentary, “The Elders” tells the universal story about life’s most important lessons while painting an intimate portrait of the lives of an aging, overlooked generation. The film is Boston-based filmmaker producer Nathaniel Hansen’s first feature length film.

A coming of age comedy directed by Nat Fixon and Jim Rash, “The Way, Way Back,” stars Liam James as 14-year old Duncan. On summer vacation with his mother Pam (Toni Collette) and her obnoxious boyfriend Trent (Steve Carrell). An introverted fellow, Duncan finds his way to a water park, where he befriends Owen (Sam Rockwell), …

Exit Elena comes from Boston native Nathan Silver and was shot not far from the home base of the Independent Film Festival of Boston, in Arlington. 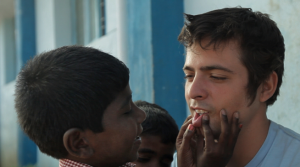 Blood Brother is a documentary directed by Steve Hooper that chronicles Rocky Braat’s journey to an orphanage for children with HIV/AIDS. Originally, Braat’s plan was stay for 10 days, but his trip was extended to the summer, and then, he realized he wanted to stay indefinitely.