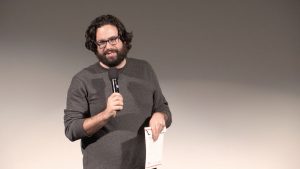 Brett Haley’s third film THE HERO screened last Friday at the 15th Annual Independent Film Festival of Boston – following the screening, Haley stuck around to answer some great questions about his subject matter and themes in THE HERO as well as throughout his career. Read our review here, and watch the video below! 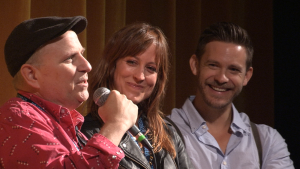 One of the best parts of any film festival are the Q&A’s – engaging, at times funny, having members from the production offer great insight to not just how a film was made, but why. Independent Film Festival Boston always hosts a great many filmmakers, producers, actors & actresses, film subjects, and more! We’ve created …

James Ponsoldt and Jason Segel speak quite candidly about their experience making “The End of the Tour,” to the IFFBoston audience. Segel talks about his concerns going into the role, and how exactly they approached the story  they set out to tell.

BENEATH THE HARVEST SKY directors Gita Pullapilly & Aron Gaudet are joined by cast member Aidan Gillen to talk about the shift from documentary to narrative, casting, and picking Maine as the setting for their teen drama. Watch the Q&A below, and read our review here.

Following the World Premiere at IFFBoston of his latest film, WILLOW CREEK, Bobcat Goldthwait was joined by lead actors Bryce Johnson, Alexie Gilmore to talk about what it was like filming in the forests of Northern California, Bobcat’s belief’s in Bigfoot, and coming of age tween Sasquatch books. Read our review of the film here.

Following the screening of Joss Whedon’s adaptation of “Much Ado About Nothing,” actors Franz Kranz and Jillian Morgese joined the pack crowd at the Somerville Theatre for a Q&A. The actors shared stories of working with Joss on this film, The Avengers, and Cabin in the Woods. Read our review of MUCH ADO here. 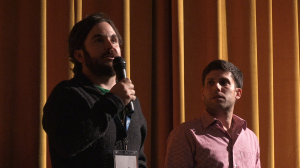 Following the screening of excellent film, The Spectacular Now – Director James Ponsoldt and co-writer Michael Weber  had a Q&A with the audience on the opening night of the Independent Film Festival of Boston.

One of the great benefits of attending the Independent Film Festival of Boston isn’t just that you are seeing great films, often times the filmmakers of these great films stick around and answer questions! Below you’ll find a complete list of films that will have Q&A following them.