We are all familiar with the buzz that’s been flying around for this movie, the big question is, does it live up to the hype?

Before I begin my review, I have to make some observations about how what we know as entertainment is changing. We live in an age where a 12 year old with a DV camera can make an entire movie and post it on Youtube. Things that have been prevalent since the early days of film making (like tripods) are now a thing of the past. 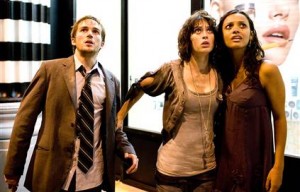 Daily there are thousands of clips posted from things as simple as someone getting hit in the nuts with a baseball, to complex narratives with rather low production value. This acceptance of a lower standard in production makes me a little nervous. Cloverfield is Hollywoods reflection of this new trend in production.

Cloverfield, if I could describe in just a sentence, I’d say it’d be a B-Monster Movie meets Youtube. What sets it apart from fifteen year old Johnny’s horror movie he shot in his basement is that when Director Matt Reeves pans and whips the camera around, there is a motivation behind it. Someone once said, every shot, every line, every camera move must have a motivation. Though on the surface, one may not believe this with Cloverfield, but I assure you, there was nothing random about one shot in this film. A movie like Cloverfield has to have a serious plan, especially for the amount of post-effects present. Though it may draw comparisons to The Blair Witch Project, there is much more clarity in the execution of Cloverfield.

So does it work? Yes, very well in fact. I found myself interested throughout the almost 90 minutes. The film wasn’t just about a monster. It was about the characters, and their need to survive. 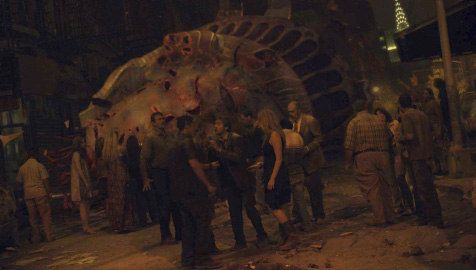 Is the acting gonna win anyone an Academy Award? Of course not, that wasn’t the point of this movie. Film has always been an escape, and what Cloverfield does is take all-too-familiar images from our own reality, and rather then terrorize us with something that we know, it makes it something we don’t know, something that (at least I hope) we’ll never see. The studio has definitely set themselves for a profit. With its $30 million dollar budget, looking around at the packed theater tonight, I think their marketing worked.

If anything, Cloverfield is a great example of how traditional storytelling is changing in this modern age. Steady, well framed, well lit shots are too perfect in in a world that no longer focuses on perfection when it comes to telling a good story. Though, my advice, if you get motion sick, pick a seat in the rear of the theater, you’ll thank me later.

One thought on “Review: Cloverfield”