With the Coen brothers seemingly poised to take home a few golden statues this Sunday night, including the coveted “Best Picture”, for their critical darling, No Country for Old Men, it seemed like a good time to go back and look at another film that swept the Academy off its feet: Clint Eastwood’s western masterpiece, Unforgiven, winner of Best Editing, Best Supporting Actor, Best Director and Best Picture in the 1992 Academy Awards.

Clint Eastwood’s Unforgiven is an excellent deconstruction of the American western and of the stoic cowboy archetype that was, ironically (or strategically), cemented in our psyche by Eastwood himself through his earlier works, most notably The Man with No Name trilogy, a three-film partnership with Sergio Leone that became the yardstick by which all other westerns are measured. However, unlike those films and countless other westerns like them, Unforgiven plays out almost like a philosophical argument against the standards set by those films. Specifically, Eastwood plays with the ideas of violence and iconography in western films as well as presenting what almost feels like a swan song for the genre (it has been Eastwood’s last western to date).

Where violence was an innocuous event that moved the story forward or showed the hero’s strength and fortitude as he dispensed justice to the morally unambiguous bad guys in most westerns, Unforgiven shows that the film’s deaths are important events, lingering on each, giving them a dense gravity that forces reflection. Each scene of violence is directed so that they are met with inner-conflict, either by the characters, the audience 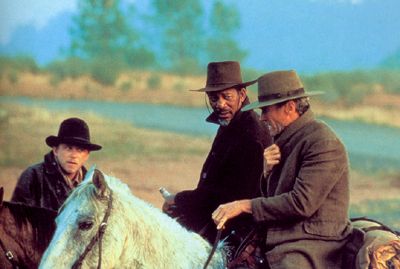 or both. The death of the first john provides an example of this. While a bounty is on his head for his part in the mutilation of a prostitute, the character was never really set up as definitively bad. He is hesitant to hold the prostitute when his partner is trying to cut her and when they bring the horses to pay back the barkeep for his property damage he refuses to give up the best horse to the keep, instead trying to give it to the woman they attacked. He tried to make amends for what he did and in doing so, elicits enough sympathy from the audience so that when Ned takes the first shot at him and hits his horse (causing the horse to fall on him and shatter his leg) we feel uncomfortable. This isn’t heroism. This isn’t the cowboy riding in and saving the day, defending the lady’s honor. This is ugly and consequential. When Munny takes the second shot and hits the kid in the stomach, Eastwood lets us linger and suffer with him through his eventual death, forcing the audience to think about it rather than immediately move on from it. Our reaction is meant to be like that of Ned’s; we feel remorse, uncomfortable and unsure as we watch him die. Eastwood shows each act of violence in this film in an unglamorous fashion and effectively demonstrates the emotional consequence of them immediately following the action as well as their lasting effects on the characters. In doing so, he causes us to question the violence we seemingly celebrate in film, showing us that it’s not the easy answer that we want it to be.

Perhaps more interesting than his play on violence is Eastwood’s take on iconography in this film. Unforgiven is almost, forgive the pun, unforgiving in its successful attempt to turn the idea of the American cowboy, the emotionless hero with the moral fortitude to stand in the face of evil and make the easy decision to kill it, on its ear and show us that these things are not so black and white. William Munny, through most of the film, is a feeble hero for the story. He is the antithesis of the archetypal cowboy: he is a bad shot, he has given up whiskey, and he forgoes “a free one” with a prostitute out of respect for his (dead) wife. But he is called to action by the young Scholfield Kid who has heard stories about Munny’s past exploits as they have become legend. It’s here that Eastwood presents the contrast of the iconic hero image to that of the actual hero. The films and stories of bravado almost never match up to the reality. The Scholfield Kid thinks of killing a man as a badge of bravery and manliness, even going so far as to lie and say he’s killed five men already just to prove his place, and he sees Munny’s image as the epitome of that. When he eventually kills the second john, who takes bullets to the chest as he sits defenseless on the toilet, the Scholfield Kid comes to the realization that taking a life like he did isn’t heroic. After it’s over and he is suffering under the weight of his actions, the Scholfield Kid goes so far as to say to Munny, “I don’t want to be like you.” Again, the film presents an excellent deconstruction of idolatry, our desire to live up to the ultimately false image of the hero we’ve created only to have it eventually fail us because it was never real. In the last ten minutes of the film Munny becomes the maverick gunslinger that up until that point he has only been discussed as being and kills a barroom full of people including the sheriff in a scene that could have easily been cut directly from a number of other westerns. In this moment, Eastwood makes sure to note that the character Munny is not to be celebrated like he would be were this any other western. Just before he kills most in the room, Munny acknowledges that he has killed women and children and “anything that has once crawled.” When we make it through this climactic scene, we’re not meant to cheer, we’re meant to question: question the violence, question the hero. This, in my opinion, is the most important scene of the movie as it exemplifies everything the film has been arguing throughout.

Eastwood’s Unforgiven is a landmark western that, were it the last western film America ever made, would have been a fitting eulogy for the genre. Deserving of the honors it won at the Academy Awards, Unforgiven pulls the curtain back on the genre to reveal the flaws in the archetypes and forces us to think about what The Man with No Name and those like him throughout western’s history have instilled in us, arguing that those icons may not have been as heroic as we have let them become. One has to wonder how effective or poignant this film would have been had it been directed by and starring anyone other than Clint Eastwood.