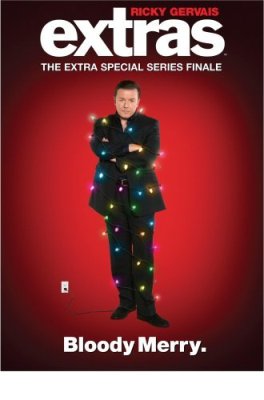 For those who aren’t familiar with the series, the previous installments consist of 2, six episode seasons that portray Ricky Gervais’ character, Andy Millman, as an extra on the sets of movies and TV shows. The first season consists primarily of his characters’, attempts to do something more than just be an extra to pay the bills, but to create a show of his own. The second season expanded upon that and saw him achieving his own sitcom that gets blasted by the critics, but seems to draw the ratings anyways, thus giving him a degree of fame. The movie basically picks up where the second season leaves off, with Andy becoming increasingly disillusioned to the fact that all of his popularity is based off of an annoying catch phrase and whiny voice (which I am officially dubbing Urkel-itis). He’s constantly trying to do what he considers to be “respectable” work while also attaining more fame and fortune—oh, plus he starts acting like dick towards his hapless agent Darren (Stephen Merchant) and down-on-her-luck fellow extra/best friend Maggie (Ashley Jensen).

The real draw of Extras lies in the celebrity guest star(s) they enlist for each episode. Throughout the first two seasons they were able to rope in people such Patrick Stewart, Ian Mckellen, Robert DeNiro, Orlando Bloom, Samuel L. Jackson and many others for some utterly hilarious extended cameo appearances. The movie was no exception, with my two favorites being George Michael tying to elude the paparazzi while off for some, um, “bad behavior” in the bushes at a park, and Clive Owen-who in one scene, which I don’t want to ruin for anybody, but can only describe it as about the most mean spirited discussion I’ve ever heard, yet it had me rolling on the floor laughing…….”Oh Fuck off, I’m Clive Owen”.

I have mondo respect for team Gervais/Merchant, because I absolutely dug the hell out the Office, and Extras was a more than worthy follow up. My only nitpick was that even though the overall arc of the series was wrapped up by the end of the movie, several of the individual characters, like Darren for example, didn’t seem to get quite the closure that they deserved—and others, like Maggie only seemed to get a partial wrapup. Perhaps this was just the nature of the beast for this particular story versus the more definitive feeling the Office movie finale left us with (which I hate to draw comparisons to here since it IS a totally different story but damnit, I’ll do it anyways), but it seemed to be missing just a little something that another 10 or 15 min might have added.

Other than that though, everyone –fans of the series and newcomers alike- will find something to thoroughly enjoy here and should certainly check this one out.

-side note- I’d just like to also comment here on the way that HBO video has oficially won my nomination for “ass-hats of the year” based on the way they decided to release this dvd. Originally it was available about a solid month ago, but only as part of a complete set of both seasons and the movie. Well if you’re like myself and anyone who was previously into the show, you had to either effectively purchase the two seasons you already owned over again, or wait until February 26th to buy it separately. Thanks a lot HBO…