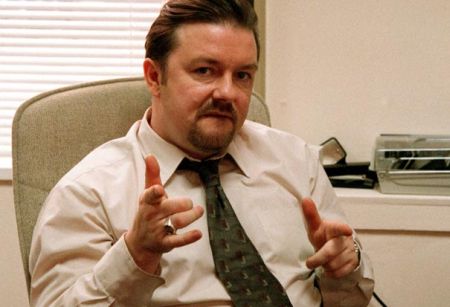 Ricky Gervais’s upcoming film, ‘This Side of the Truth,’ is about a world where no one can lie. Until Gervais shows up. This is the directorial debut for Gervais, who has teamed up with Matt Robinson (co-writer and co-director of the film) to bring about this picture. Three things have me excited about this Gervais-joint:

1. If ever there was a concept for Ricky Gervais to shine in a feature-length film for 2 hours, it’s this.
2. He appears to be scouting for locations in Boston!!
3. He’s keeping track of the production of this film in a blog that’s, what’s the word? Oh yes: hilarious!

Ricky Gervais is the mastermind behind the series ‘The Office’ and ‘Extras’ and has appeared in supporting roles in feature films such as ‘Stardust’ and ‘A Night at the Museum.’ Read the good times on putting together ‘This Side of the Truth’ at Ricky’s blog here, and get giddy at the concept of Karl Pilkington doing an audio commentary on the film when the DVD is out.