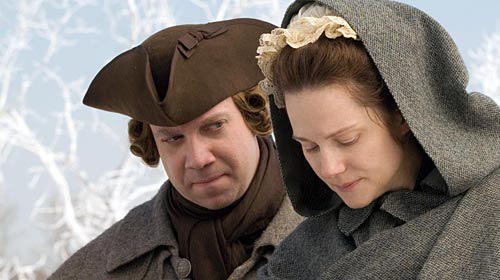 When I first heard of the Tom Hanks produced John Adams HBO-miniseries, my ears perked up. The history of the founding fathers, the American Revolution were all subjects that I had a past obsession with. Not to mention many of the projects Hanks’ puts his name on for HBO is generally damn good (Band of Brothers anyone?) John Adams is based on historian David McCullough’s book, and adapted for television by Kirk Ellis (Screenwriter of Anne Frank, and The Three Stooges teleplays).

The miniseries begins with John Adams’ defense of the British soldiers that killed 5 American’s in the infamous Boston Massacre, and follows to his death. The production design and cinematography found here are excellent, and the period convincing. Paul Giamatti is well cast here. He plays John Adams as one pictures him, a great person that stands for his beliefs and values, a family man, and a man who puts the interests of his own state at the forefront. The series also stars Laura Linney as Abigail Adams, Tom Wilkinson as Ben Franklin, and an unrecognizable David Morse as George Washington.

At times, the epic statements made by some of the characters, hero shots with exclamations like “Independence is the only way,” etc. were received with a wince. But, it’s still entertaining and informative, and the performances found were all excellent.

You can catch the first two episodes on HBO-On Demand, the series will be on Sunday evenings.