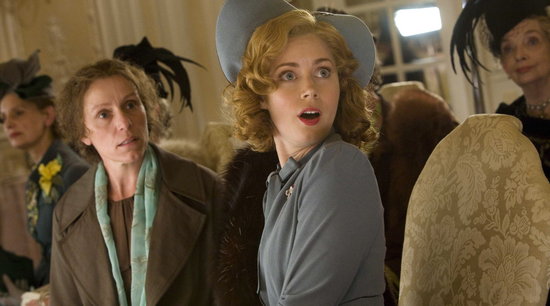 World War II is in full swing. The blitz is underway in London. Food lines are long. People are scared and worried about their future and the future of the city. And an American showgirl is looking for help in organizing her life.

When she arrives, it’s not what she expected. Instead of a family to take care of, it’s actress Delysia Lafosse. And she is having man trouble. She’s bedded the son of an upcoming play’s producer in an effort to gain the title role. She’s also having a fling with the piano player at her nightclub gigs. And she’s doing this all in the apartment of the nightclub owner. Miss Pettigrew has her work cut out for her. And she has less than 24 hours to do it.

‘Miss Pettigrew Lives For a Day’ is a simple story, shot very much in the style of the 1930s screwball comedies that it’s paying tribute to. The storyline moves quickly, but is basic enough to follow along. The acting is all excellent, with Amy Adams and Frances McDormand both standing out. The supporting cast, including ‘Rome’s’ Ciaran Hinds, is also very well cast.

The screenplay is well written and does a good job of handling several sticky topics very well. The discussion of the first World War is restrained and reserved; much like people who lived through it and lost people would have. Director Bharat Nalluri also does a good job, shooting so much of the movie through mirrors, showing that perhaps these characters aren’t all they claim to be.

All platitudes aside, the movie doesn’t completely add up. And why that is, I’m not completely sure. Maybe, for all its speed, it moves too slowly at times. Maybe some of the characters are too one-dimensional. (Which is an odd thing to say since this type of movie is supposed to feature easy-to-identify characters.)

While ‘Miss Pettigrew’ isn’t perfect, it’s worth seeing. Maybe not in the theater. Maybe making it the center of a night out is too much for it’s shoulders to bear. However, if you’re a fan of screwball comedies and the era, ‘Miss Pettigrew Lives For a Day’ might be the perfect DVD rental. -Sam