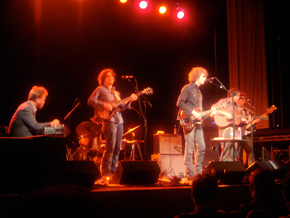 Despite the opening worry, Louris delivered, performing almost all of his first solo album, ‘Vagabonds,’ as well as many songs from his days with the popular alt-country group the Jayhawks. If Rolling Stone called the Jayhawks one of the best bands you’ve never heard of, then Louris must be one of the best songwriters you’ve never heard of. Which is a true shame. Louris delivered an excellent set, with a solid backing band to a half-full house on Tuesday night in Somerville, Massachusetts.

Louris’ voice and lyrics are what make him stand out from other musicians and both of those things were on display. From the opening ‘Omaha Nights,’ to ‘True Blue,’ and ‘She Only Calls Me on Sunday,’ the songs from ‘Vagabonds,’ reveal Louris searching for both questions and answers (big and small) in life’s everyday occurrences.

Without a piano in the band, the guitars had to fill the void, and they did ably, with Louris tearing off several solos, filled with distortion and feedback. They were the perfect counter to a voice that always comes across crystal clear, cutting through to the heart of the matter.

Louris also delved into his back catalog, playing a good number of Jayhawks tunes. ‘Waiting For the Sun,’ ‘I’d Run Away,’ ‘Blue,’ and ‘Save It For A Rainy Day.’ (He also pulled out ‘Everybody Gets By,’ a un-recorded Jayhawks gem.) Louris also gave a nod to side project Golden Smog, playing, ‘Listen Joe,’ and ‘Until Came You Came Along.’ He also played ‘Every Word,’ his contribution to the documentary film ‘Wordplay,’ as well as one he co-wrote with the Dixie Chicks. (Introduced as, ‘now it’s time for the name dropping.)

If there was a weak point in the evening, it was some of the harmonies, which is a true shame. The backing band Vetiver were solid and performed well, but on several occasions there were some bum notes hit. Even Louris seemed to notice and, according to several other concert goers, seemed upset with the flubs.

Louris was fun and entertaining, with his comments between songs sounding like he was hanging out with a few friends, playing wonderful music. And maybe that’s the best way to describe the show. A fun, well-played evening of music with friends. Isn’t that enough? -Sam