The Wingman, a tradition possibly older then the Earth itself. Paleontologists find evidence of it in the fossil record. You know, a velociraptor talking to one of the hot Stegosaurus’ friends while his buddy T-Rex gets her a drink. In honor of this, I’ve compiled a list of some famous wingmen throughout film history. This is not a ranked (or complete) list, but it is just that, a list of some Ultimate Wingmen.

Sallah (Raiders of the Lost Ark, Indiana Jones and the Last Crusade)

Here’s a guy who will give you his home, and keep Nazi’s busy while you investigate an ancient map room to find the Ark of the Covenant. Sallah (played by John Rhys-Davies) is the “best digger in Egypt.” Not only did Sallah help Indiana Jones recover the lost ark of the covenant, but the Holy Grail too (even if he did lose Marcus Brody, but in his defense, Brody got lost in his own museum).

Sure, Iceman and Maverick mighta bumped heads starting out, but you were there in the tough times for him. Not much more can be said other then to quote Iceman speaking to Maverick, “You can be my Wingman, anytime.” “Bullshit,” Maverick answered, “You can be mine.” And then they hugged, and it was beautiful.

Chewbacca (Star Wars: A New Hope, Empire Strikes Back, Return of the Jedi)

I think “Chewie,” is one of the most popular wingmen on his list. Han Solo saved his life, and Chewbacca vowed to follow him to a galaxy far, far away the rest of his time on earth. He smashes stormtroopers, and turns himself in for a bounty to Jabba the Hutt so he can save you from the inside. Furthermore, for you hardcore Star Wars followers, you know that Chewbacca sacrifices himself to save Solo’s son. Wingman? I think so.

Sam and Rick had an interesting relationship, though at times it felt like it was strictly business, Sam was clearly privy to Rick’s relationship with Ilsa. So much so he knew how a single song (As Time Goes By) could break Rick in two. A true wingman would tell a trouble making girl to hit the road. Sam doesn’t do that, but he warns Rick of the trouble Ilsa brings. Sam followed Rick from New York to Paris, and Paris to Casablanca, if that ain’t a pal, I don’t know what is.

Wait, so let me get this straight, you have to take this crazy ring to a fiery volcano, and throw it in to destroy it. But along the way, these crazy hooded guys are going to chase us on flying beasts, and entire army’s are going to go to war, just for this piece of jewelry? If Samwise Gamgee was any other guy, he woulda said, screw you buddy, find somebody else. A true wingman stands up for you, defends, and protects you, even from yourself. With the ring consuming Frodo, Sam still stayed strong.

Chuckie Sullivan (Good Will Hunting)
A true wingman tells a friend how it is even if it’s not what he wants to hear. Chuckie saw Will wasting his talent, sure, it may hurt to hear you’re selfish, but, Chuckie told him how it was. Though, his words may possibly lose him his best friend to the world, he still knows its for the best.

Okay, maybe a guy who’d ask to use your car to shuttle a dead body to bury in upstate New York isn’t the best kinda wingman, but, he’d step it up if you needed him. Though, Nicky Santoro from Casino could earn this spot as well (any guy who’d stab a guy in the neck because he insulted you is top-notch, right?), but having an affair with your wife might make you think twice. Tommy has his scary side, he shoots kids bartending for him, and beats to death made guys, but, he introduced your wife, so, he can’t be all bad, can he? 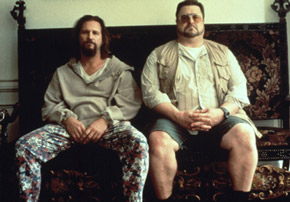 Walter is borderline crazy at times, but he was there for the Dude. His advice is a bit wonky, his actions questionable, but he’d lay down in traffic for the Dude. As a Vietnam vet, loyalty, honor, and friendship are important to Walter. Friendships are so important to him, they supercede religion, skipping out on the Sabbath just to help the Dude out. Yeah he grumbles, but he came didn’t he? What about Donnie you say? Donnie’s a bit out of his element.