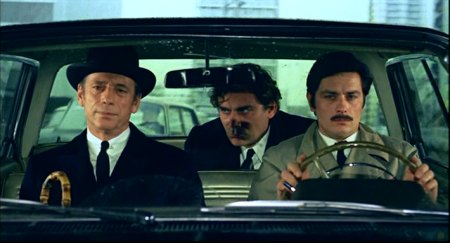 A web-site dedicated to action star Chow You Fat is claiming that Chow, along with Hong Kong director Johnny To will be teaming up to shoot an English-language remake of Jean-Pierre Melville’s ‘Le Cercle Rouge.’  Orlando Bloom and Liam Nesson are also reportedly part of the cast.

The original film starred Alain Delon and Yves Montand.  The movie is about a jewel thief and a murderer who meet up and plan an elaborate jewel heist.  (Because it is a Melville film, the heist is incredibly elaborate.)

As a huge Melville fan, I’m loathe to imagine a re-make of one of his masterworks, but, maybe it’ll be good.  Maybe.