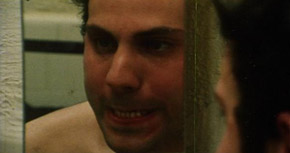 ‘Frownland,’ winner of a Special Jury Award at SXSW is a film tracing the miserable existance of Keith Sontang, a “troll from under the bridge.” He commutes from his Brooklyn apartment to the suburbs, hocking coupon packets. Keith is aware of the disgust he arouses in people, making him even more demented and unlikeable.

The first feature-length film written and directed by Ronald Bronestein has been receiving quite a bit of acclaim from the Spirit Awards to a Critic’s pick nod from The New York Times, the film was self-financed on a microbudget.

The concept sounds extremely interesting, we were just talking about how difficult it is to capture an audience with unlikeable characters, so we are anxious to see this film at the festival this week.

Frownland will be screening at the Independent Film Festival of Boston, Saturday April 26th, at 8:15pm at the Somerville Theater, and Sunday, April 27 at 10:00pm at the Brattle Theater.