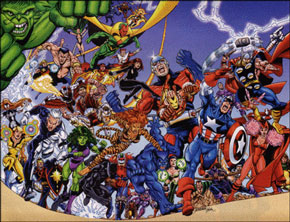 After the success of ‘Iron Man’s’ opening weekend, Marvel has taken the opportunity to give their stock a lil boost with a lil schedule announcement.

Like we reported earlier, the successful bow has set in motion a sequel with an April 10, 2010 release date for the iron plated super hero, starting that years Summer season.

Other films in the works are ‘Thor,’ about a hammer wielding Norse God. The film is set to be directed by Matthew Vaughn (Layer Cake). ‘Thor’ is set for a June 4, 2010 release.

Zak Penn (X-Men) is writing ‘The Avengers,’ which teams up Iron Man, Incredible Hulk, and Captain America. A film like this suffers the same problem as Justice League, no word on if the established characters will be played by the actors who brought them to life in other films. ‘The Avengers’ will be released in 2011, along with ‘The First Avenger: Captain America.’

A film based on ‘Ant-Man,’ is also in development, Edgar Wright, writer and director of Hot Fuzz and Shaun of the Dead has signed on to write and direct.

All films will be distributed by Paramount, who has a deal with the studio. The next self-produced/financed film from Marvel unspools is ‘The Incredible Hulk,’ which unspools June 13.