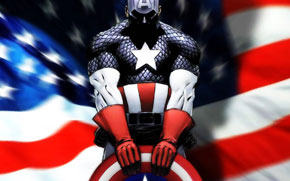 Some more details are emerging about the series of upcoming films produced by Marvel Studios via Kevin Feige, president of Marvel Studios.

‘The First Avenger: Captain America,’ will be a World War II period piece, and, contrary to rumors, Matthew McConaughey has not been cast as the shield bearing hero.

The upcoming ‘Thor’ movie will take place mostly in the Norse realm of the gods, Asgard, not in the real modern world.

Honestly, ‘Captain America’ absolutely peaks my interest, but ‘Thor?’ I honestly never cared for the character. I worry that we’ve reached a point that some of the most popular/best Marvel characters have had their chance, and now, its on to giant hammering waving Norse gods, and ant people.