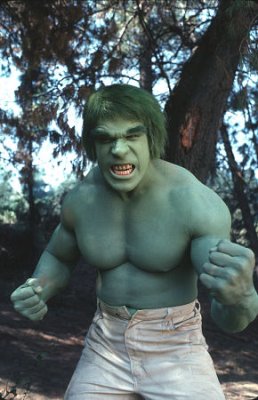 Just caught wind of this one via the Hollywood Reporter: Apparently on June 9th American Gladiators will have themselves an Incredible Hulk themed episode to promote the upcoming film! Audience members will be flooded with Hulk paraphernalia, while the gladiators (including a very green Titan) themselves will get to use those big toy hulk hands in the gauntlet event. Plus, to top it all off, Lou Ferrigno will be a special guest host (thus doubling your Hulk-hosting power).

BWAHAHAHAHA, how funny and awesome is that! I don’t care what anyone says, it’s great to see Lou Ferrigno back on tv again—His ‘incredible hulk’ use to scare the crap out of me when I was a little guy back in the day.

One thought on “American Gladiators: “You won’t like them when they’re ANGRY”!”