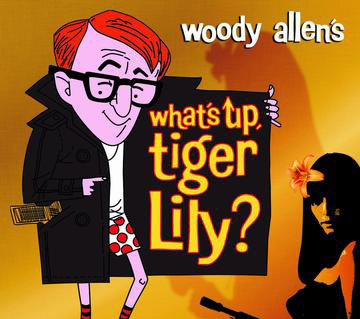 ‘Tonight I’ve got a question for you,’ sang Rhett Miller and the Old 97s. Everyone has questions. Only some people have answers. Here are three great movies that not only ask questions but also provide answers. (Well, some answers. They don’t have answers about the secret of life, or why the letter you’re expecting never arrives when you want it or why Aston Kutcher continues to find work.)

Who is Killing the Great Chefs of Europe?
This 1978 crime comedy combine three of my favorite things in life: Europe, (the continent, not the band,) food and George Segal. Oh, and Jacqueline Bissett. The story is a simple one: someone is killing all the great chefs of Europe in a manner befitting their best known dishes. (The pastry chef is baked in a pie, etc..) Segal is a food writer and Bissett is his ex-wife. The two end up investigating the murder together while bickering all the while. The story jumps around Europe, so you never get bored. Plus, the food in this one looks very good. I’m not going to be a pompous A-hole and call it a ‘delightfully delicious murder mystery,’ but it’s pretty cool. Did I mention Jacqueline Bisset’s in it? She is. And this is right around the time she made ‘The Deep.’ And ‘Le Magnifique.’ (God, there’s a lot of Bisset in these articles, isn’t there? Anyone have a problem with that? Didn’t think so.) For a light, fun movie, you can’t do better than this one. It’s one of my personal favorites.

What’s Up Tiger Lily?
Remember when Woody Allen made nothing but silly movies? That was a long time ago, wasn’t it? But damn it if I don’t love them. ‘What’s Up Tiger Lily,’ is one of his earliest films, coming hotly on the heels of ‘What’s New Pussycat?’ (Which Allen co-wrote.) (While this is also a question movie, it’s not the best of plotted films, though I am a fan of Peter Sellers in this one.) For ‘Tiger Lily,’ Allen bought the rights to a Japanese action movie, ‘Key of Keys,’ and re-dubbed it. The original movie is about a search for secret microfilm. The Allen version is about an egg salad recipe. There’s also a ton of cutaway footage to the group The Lovin’ Spoonful, which Allen was less than thrilled with. (Not being a fan of The Spoon,’ I kind of want to throw something at the TV everytime they show up.) The movie is silly and stupid, but it’s kind of fun. Plus, watching it, you know Woody’s version is better than the original ‘Key of Keys.’

What Ever Happened to Baby Jane?
If this movie had been made today, it probably would be called, ‘What Ever Happened to Screech?’ Thank God, it hasn’t been re-made. The movie stars Bette Davis and Joan ‘Wire Hangers’ Crawford. Two sisters live in a decrepit old mansion in Hollywood. One sister was a child star in vaudeville. After the sisters are in a car accident caused by the drunk famous one and the other sister is paralyzed, the two end up living together as Jane takes care of her sister, as she is wracked by guilt from the accident. The movie is creepy. Bette Davis doing a child’s voice? Oh, God, it’s unnerving. Downright creepy. And we haven’t even gotten started on the whole ‘rat on a dinner plate’ scene. Needless to say, it’s also creepy.

Plus, the movie puts Davis and Crawford on screen together for the first time ever. And they hated each other. Really hated each other. Joan Crawford was married to one of the heads of the Pepsi Corporation. So Bette Davis had a Coke vending machine installed outside of her trailer. I mean, just think of that image as you watch this movie. Also, no wire hangers. Ever. -Sam