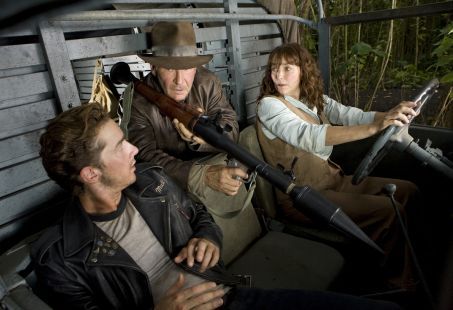 After 19 years, Indiana Jones is back. The character that so many of us grew up with has returned fedora and all. So, does it live up to the hype? Well, kinda.

I’m not going to go over the plot. Read it somewhere else, if you’re that concerned about it. ‘But the movie,’ I hear you ask, ‘the movie, is it any good?’ Well, kinda. The film is ridiculous in spots, but that’s what you get in an Indiana Jones movie. If you want emoting and fully believable characters, look elsewhere. This is an homage to the 1940s serial films. A lot of action, with bare amounts of plot to hold everything together. However, one gets the feeling that George Lucas and Steven Spielberg are starting to believe the hype. When people keep telling them how great ‘Raiders’ was, or how funny it was in ‘Last Crusade,’ when Indy and his dad were tied together and they kept calling out for each other and then looking in opposite directions. ‘Why not give the audiences what they want,’ you can almost hear Lucas and Spielberg say. Why not? Because you’re the storytellers, that’s why. Your job is to entertain the audience, not to let it choose its own adventure.

The movie is an uneven one. The first hour is all plot and back story, all of which doesn’t amount to a hill of beans because, well, this is an Indiana Jones movie. It’s not supposed to have a ton of plot and back story. Here’s the idol. Here’s the bad guys. And we’re off. However, it takes a good 60 minutes for things to start happening.

There’s a scene with ants where they cover people and eat them alive. Pretty cool. There’s a chase sequence through the jungle with a bunch of different cars. Pretty cool. But part of my problem was the fact that Spielberg and producer Frank Marshall said before the movie came out that special effects would be kept to a minimum. Yet these two sequences are nothing but an orgy of CGI. Does that matter? Well, kinda. It’s a problem when you get taken out of a movie’s action by the fact that the light reflecting off of Shia LeBouf’s pants doesn’t match the other lighting in the rest of the shot. (I bet you never thought your read a dissertation on the reflection of light and Mr. LeBouf’s trousers on this site, did you?)

So, the CGI is a bit crap, the story is a little too involved for a simple action movie, how’s the acting? It’s good. Nothing too spectacular and Cate Blanchett’s Russian accent seems to waver a bit, but, not to a point that it ruins the movie. The end piece of the film is nice, but again, it’s a bevy of special effects. Don’t tell an audience you’re not going to use special effects and then turn around and race as fast as you can to the nearest computer.

But that’s not reason enough to hate this movie. And I didn’t hate it. However, at film’s end, when the lights came up, the only thought that passed through my mind was, ‘eeh. At least it didn’t suck.’ Is that a reason to see a movie? That it isn’t the cinematic abomination that you were scared of seeing? Not really. -Sam

2 thoughts on “Sam’s Review: Indiana Jones and the Kingdom of the Crystal Skull”