The poster tag line was, ‘if it could have been forever.’ Well, it wasn’t, but it felt like it. ‘Paradise,’ the rip-off film inspired, (if that’s the right word,) by the box office success of ‘The Blue Lagoon,’ stars Willie Ames and Phoebe Cates. (Ah, young Phoebe Cates. So good in ‘Fast Times at Ridgemont High’ and so bad in this film.) To begin, here’s a quick summary of the plot. Set during the Victorian period, two American kids travel in a caravan from Baghdad to Damascus. David, the boy’s parents are missionaries and have raised the boy with a strict religious background with The Bible being the only book that is right. Sarah, the girl, is traveling with an older gentleman, hired by her parents to see her on this trip and keep her safe. At a water stop, a white slave magnate raids the camp, killing everyone. However, the children escape and grow up and learn about their bodies and each other.

If you’ve read that far, congratulations. You have just spent more time thinking about this film than the writers did. The film is clearly an attempt to stop off at the teen sex ATM, after people flocked to see Christopher Atkins and Brooke Shields learn about their bodies and each other in ‘The Blue Lagoon.’ The producers must have thought, take two young kids, have them run around scantily clad and bingo- instant hit. Thankfully, sometimes audiences can smell the BS from miles away.

What’s wrong with this movie? Well, where to begin? First off, Willie Ames has the acting range of small inanimate objects and Phoebe Cates is, in her first film role, not that much better. The script calls for them to laugh at inane jokes and take their clothes off in slow motion. David’s ‘religious dilemma’ is quickly solved by Sarah putting his hand on her breast and suddenly years of guilt is shrugged off. They know how to clothe and feed themselves, but they don’t know about reproduction? Really?

The plot is also ridiculous. There are scorpion bites that get better the next morning. The kids are expert archers after giving no such indication of that particular talent. There are gratuitous cuts to shots of monkeys who cover their eyes in embarrassment, have a natural ability to play the flute and who know how to fish. Sadly, these monkeys didn’t have the opposable thumbs to call their agents and complain for getting them this particular gig. 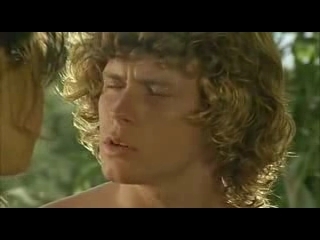 How does this film fit into the 1980s teen sex pantheon? Rather poorly. These teens aren’t believable or anyone the teens watching could relate to. I mean, what teen has ever had to escape a white slave trader? Exactly. I learned nothing new from watching this movie and I gained no insight into the mind of a teenager. (Except, perhaps, for the fact that teens don’t know how to rest a camel properly. Not exactly the kind of advice teens in the 80s were hungry for.)

What’s good about this movie? Well, it is in color. And there is sound. And occasionally a really wide shot where you can’t see the actors that looks really pretty. Otherwise, the film is 100 minutes continually banging of your head against the wall. -Sam